#Prettyboy Must Die by Kimberly Reid 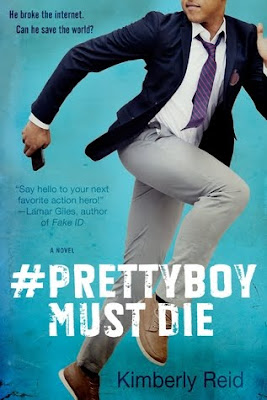 A CIA prodigy's cover is blown when he accidentally becomes an internet sensation in #Prettyboy Must Die, inspired by the #Alexfromtarget story.When Peter Smith's classmate snaps a picture of him during a late night run at the track, Peter thinks he might be in trouble. When she posts that photo--along with the caption, "See the Pretty Boy Run,"--Peter knows he's in trouble. But when hostiles drop through the ceiling of his 6th period Chem Class, Peter's pretty sure his trouble just became a national emergency.Because he's not really Peter Smith. He's Jake Morrow, former foster-kid turned CIA operative. After a massive screw-up on his first mission, he's on a pity assignment, a dozen hit lists and now, social media, apparently. As #Prettboy, of all freaking things.His cover's blown, his school's under siege, and if he screws up now, #Prettyboy will become #Deadboy faster than you can say, 'fifteen minutes of fame.' Trapped in a high school with rabid killers and rabid fans, he'll need all his training and then some to save his job, his school and, oh yeah, his life.

#Prettyboy Must Die was a fun and high stakes novel. There were some ups and downs to this book, but overall, it was a very entertaining story.The main character, Jake/Peter, was the best part of this book. He was such a funny and charming character! His voice always felt so realistic and relatable. I loved hearing from his perspective and watching him deal with all the obstacles that were thrown his way. However, there were some characters that I didn't connect with as well. Some of the characters felt a little flat and predictable. There were also some characters that felt TOO perfect. However, Jake/Peter made up for most of it!I loved the overall idea of the plot of this story. There were so many exciting and quirky elements to this story. I really appreciated how much effort the author put into making the plot unique and so much fun. There were some plot lines that felt a bit ridiculous and cliche, but they still added some exciting elements to the story. Overall, this was a creative and unique novel! If books about a spy is up your alley, then this is the book for you!3 / 5 Fangs*This ebook was given to me in exchange for an honest review. *
Posted by MissDaemon at 8:00 AM