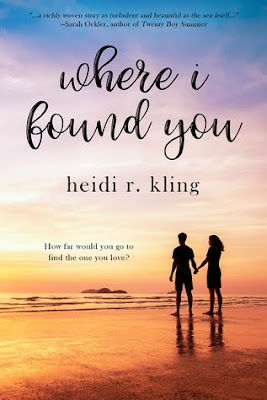 After her mother's plane went missing over the Indian Ocean, seventeen-year-old Sienna Jones gave up everything she loved about living in California. No more surfing. No more swimming. No more ocean, period. Playing it safe, hiding from the world, is the best call. Until her dad throws down the challenge of a lifetime: spend the summer with his humanitarian team in Indonesia, working with orphans who lost everything in a massive tsunami. The day they arrive, Sienna meets a mysterious boy named Deni, whose dark, intense eyes make her heart race. Their stolen nights force her to open up and live in a way she thought she couldn't anymore. When she’s with Deni, she remembers the girl she used to be…and starts to feel like the woman he sees in her. A woman he wants for his own.Gulp.But when Deni’s past comes looking for him, Sienna’s faced with losing another person she loves. She can’t do it. Not again. Fortunately, this time, she has a plan.

I did not know what to expect going into this book, but I was pleasantly surprised! This story was full of romance, self-discovery, loss, angst, and hope. The author tied in so many different elements to this story, which kept the plot refreshing and interesting. The angst in this book was a little much at times, but it definitely kept the story moving!I loved how this book mainly took place in Indonesia. I have never been to Indonesia before or read a book set there, so it was so interesting to read about. I don't know a lot about their culture, but it seemed like the author researched their customs and tried to represent it as accurately as possible. I really enjoyed the cast of characters in this book. Sienna, the main character, was a really inspiring girl. I felt her pain and anguish over the traumatizing events of her past. It was so wonderful to watch her overcome her fears and become a stronger person. Her growth throughout this story was one of the best parts of this book. There were also a lot of well developed side characters that added depth to the plot. The only characters I wish I could have seen more of were Spider and Bev. Bev was Sienna's best friends from the states, so we didn't get to see a lot of her throughout the book. I am keeping my fingers crossed that we will see more of her in book two! The relationship between Spider and Sienna left a lot of unanswered questions, so I am also hoping to see that addressed more in the sequel. The romance in this book was full of passion and intimate moments. Deni said some corny lines, but I still swooned just like Sienna did. However, I was always a little wary of Deni though because I felt like he had some secrets he was hiding. There were a lot of obstacles that Deni and Sienna had to face, and I am intrigued to see how those obstacles will carry over into in the sequel. I truly did feel the connection between Deni and Sienna, even if their romance was a little rushed towards the end. I ship them SO HARD. I NEED ANSWERS ABOUT THEIR RELATIONSHIP AND I WANT THEM TO GET THEIR HAPPILY EVER AFTER. Overall, I thought Where I Found You was an entertaining and memorable read. I am extremely excited to see what adventures the characters go on in the sequel!