It Takes Two To Tumble by Cat Sebastian 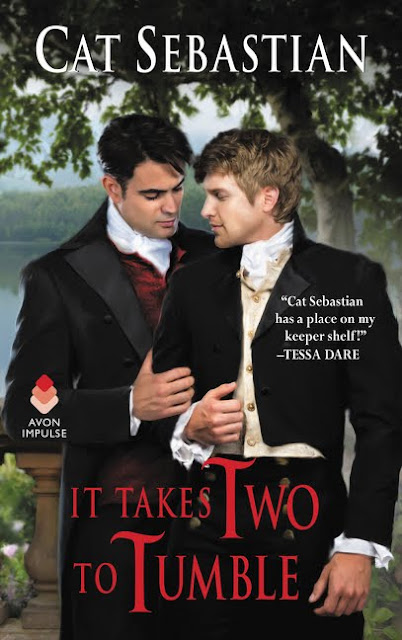 After an unconventional upbringing, Ben is perfectly content with the quiet, predictable life of a country vicar, free of strife or turmoil. When he’s asked to look after an absent naval captain’s three wild children, he reluctantly agrees, but instantly falls for the hellions. And when their stern but gloriously handsome father arrives, Ben is tempted in ways that make him doubt everything.

Some of Phillip Dacre’s favorite things:
His ship
People doing precisely as they’re told
Touching the irresistible vicar at every opportunity

Phillip can’t wait to leave England’s shores and be back on his ship, away from the grief that haunts him. But his children have driven off a succession of governesses and tutors and he must set things right. The unexpected presence of the cheerful, adorable vicar sets his world on its head and now he can’t seem to live without Ben’s winning smiles or devastating kisses.

In the midst of runaway children, a plot to blackmail Ben’s family, and torturous nights of pleasure, Ben and Phillip must decide if a safe life is worth losing the one thing that makes them come alive. 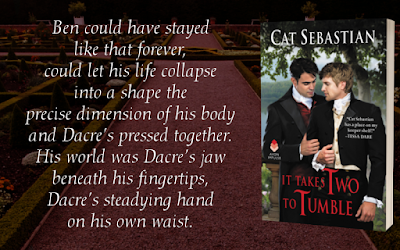 After the fact, Phillip thought he might have handled the situation a bit more gracefully if the children hadn’t been in a tree. But he was not at his best, having walked the distance from the coaching inn to the house, with each step growing more disoriented by the sheer familiarity of the terrain. Surely the place ought to have changed. But every rock and tree aligned precisely with memories Phillip hadn’t even realized he still had.
Despite having sent a messenger ahead with the approximate time of his arrival, the children were not waiting in the hall to greet him. Of course they wouldn’t be, he told himself. That had been Caroline’s doing, and she was gone. Their failure to appear was just further proof of how badly Phillip’s intervention was needed. He needed to get to work turning them into well-behaved, competent midshipmen. Children, he corrected himself. Yes, children.
The servant who opened the door told Phillip he’d find the children in the orchard with the vicar. Phillip found this surprising, as nothing in Ernestine’s final letter had indicated religiosity as part of the children’s reign of terror. But instead of discovering the children at work in prayer or singing hymns, he found them high up in a cherry tree.
The plain fact of the matter was that children did not belong in trees, at least not when they ought to be in the hall awaiting their father’s return. Nor did vicars belong in trees at any time whatsoever. He might not have much experience with either, and thank God for it, but he knew trees were not the natural habitat of either class of person. He had expected to see his children for the first time in two years in a setting that was slightly less arboreal. Somewhere he could properly see them and they could properly see him and they could all say whatever the hell they were supposed to say in this situation without Caroline to manage things. Instead all he got was a glimpse of booted feet vanishing higher into the branches accompanied by the sound of stifled laughter.
The vicar spotted him first, and promptly swung down from the tree to land at Phillip’s feet. At least, Phillip assumed it was the vicar, and not some stray stable hand who had taken to capering about the orchard. But didn’t vicars wear uniforms of some sort? Special hats or black coats? The chaplain on the ship always had. This fellow was in his shirtsleeves, and if that weren’t bad enough, his sleeves were rolled up. The chaplain had never done that. The chaplain had been about sixty. And bald. This fellow had wheat-colored hair that needed a cut and freckles all over his face. He was nothing like the chaplain. Unacceptable.
“Oh damn,” the vicar said. Phillip gritted his teeth. Swearing was another thing the chaplain had never done. “I mean drat,” the man said, his freckled face going pink. “Bother. You must be Mr. Dacre.”
“Captain Dacre,” Phillip said frostily. This fellow had to go. No discipline. No sense of decorum. No wonder the children ran amok if they spent time in this man’s company. “You have the advantage of me,” he said, not bothering to conceal his frown. He never did.
“Ben Sedgwick,” the vicar said, smiling in a lopsided, bashful way. He stuck his hand out, and Phillip had no choice but to take it. The vicar’s hand was warm and his grip was firm, and Phillip’s gaze automatically drifted down to the man’s exposed forearm, sun-burnished and dusted with light hair.
“Thank you, Mr. Sedgwick,” Phillip said. “You may take yourself off.” His effort to dismiss this careless young vicar was interrupted by a rustle of leaves and the thud of a child landing at his feet.

The child was tall, lanky, and excessively rumpled. “Edward,” Phillip said, briefly startled by the changes a lapse of two years wrought in children. Phillip had last seen his older son as a coltish child of eleven. Now Phillip could discern two things—one, that he looked very much like Caroline, and two, that he was not best pleased to see his father. For an instant, Phillip could hardly blame him. Phillip had never much enjoyed seeing his own father either. When the navy had taken his own father away for years at a time, Phillip had rather thought they had all been the better for it.
He held out his hand and noticed the barest hesitation before his son took it. “You look so much like—”
“I know I look like Mama,” Edward said coolly, dropping his father’s hand. “I have a looking glass.” His scowl was so intent that Phillip opened his mouth to scold the boy. “Mr. Sedgwick,” Edward said, turning to the vicar, “I’m going to finish my history lesson.” Without waiting for a response from Sedgwick or so much as a by-your-leave from Phillip himself, the child dashed off towards the house.
While Phillip had always striven to keep order on his ship in less brutal ways, some captains wouldn’t have hesitated to have boys flogged for even less blatant insubordination. Phillip swallowed his anger and turned his attention to the tree, where he could see two pairs of dangling feet.
“Margaret,” Phillip called up into the tree. “James.”
“Oh, they won’t come down,” Sedgwick said cheerfully. “Not a chance.”
“Excuse me?”
“I wouldn’t even bother calling them. They’ll stay up there until the sun sets or until the spirit moves them otherwise.” He seemed utterly undisturbed by this. His eyes were actually sparkling, for God’s sake.
“And you permit this?”
Sedgwick’s brow furrowed. This was the first lapse in the blithe and idiotic good cheer he had displayed since Phillip’s arrival. “Well, I don’t know what you expect me to do about it. Rope them like a couple of stray sheep? They’re safer up there than they are getting into whatever devilry they might seek out elsewhere. Really,” he said, lowering his voice and leaning close in a way that made Phillip instinctively mirror the pose until he realized what he was doing and straightened up. Proximity was the last thing he needed with this man. “The tree’s been a godsend. They haven’t been capering about the rooftops even once since they discovered how climbable the cherry trees are.”
Phillip blinked. “What I meant,” he said slowly, “was that perhaps you would like to tell them to come down.”
“Tell them?” the vicar repeated, as if Phillip had suggested a satanic ritual. “Won’t do a blessed thing other than inspire them to more mischief, I’m afraid. No, no, leave them safely up there, and when they’re hungry they’ll come inside.”
“Thank you for everything you’ve done,” Phillip said in precisely the tone he’d use towards a sailor about to be assigned morning watch for the foreseeable future. “But now that I’ve returned I’ll see to engaging a proper tutor.”
The man had the nerve to look hurt. Really, what had he expected? If Phillip had wanted his children to run about like South Sea pirates, he could have stayed on his ship where he belonged, thank you very much. But instead he would hire a tutor for the boys and a governess for Margaret. And when they were ready, he’d send them off to school, where they belonged.
“About that,” the vicar said slowly. “I’m not sure you’ll find a tutor. They’ve run through a good half dozen and I fear that well has run quite dry.”
“A half dozen!” Ernestine hadn’t mentioned that in her last letter. Or at least he was fairly certain she hadn’t. He knew there had been some trouble engaging suitable help, but quite possibly she had obscured the details. Well, it was a good thing he was here, then. He would see to it that his household was as it ought to be, that his children were on a safe course, and then he’d go back to sea. Two months. He had turned far more insalubrious characters into perfectly disciplined first-rate sailors in less time than that, hadn’t he? He was used to commanding dozens of men in clockwork precision. Surely he could make a couple of children—his own children, at that—fall in line.
“Never mind that,” he said. “I have everything in hand. Good day,” he added when the vicar didn’t seem inclined to take the hint and leave.
“Good luck,” the vicar said, gathering his discarded outer garments and carelessly dropping his hat onto his head.
Phillip thought he heard the man laugh as he made his way towards the house.
Ben gave it fifteen minutes before Captain Dacre came begging for help. Half an hour at the outside.
Likely as not, the captain would be tied to a burning post before Ben had his valise packed.

Cat Sebastian lives in a swampy part of the South with her husband, three kids, and two dogs. Before her kids were born, she practiced law and taught high school and college writing. When she isn’t reading or writing, she’s doing crossword puzzles, bird watching, and wondering where she put her coffee cup.


This promotion is brought to you by Pure Textuality PR.