So Over You by Kate Meader 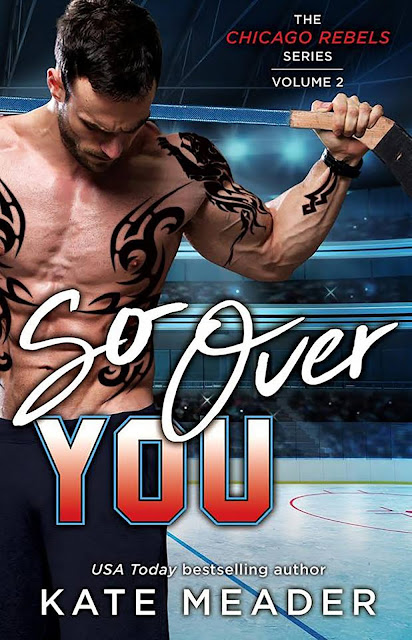 Three estranged sisters struggle to sustain their late father’s failing hockey franchise in Kate Meader’s sizzling Chicago Rebels series. In this second entry, middle sister Isobel is at a crossroads in her personal and professional lives. But both are about to get a significant boost with the addition of a domineering Russian powerhouse to the Rebels....


Isobel Chase knows hockey. She played NCAA, won Olympic silver, and made it thirty-seven minutes into the new National Women’s Hockey League before an injury sidelined her dreams. Those who can’t, coach, and a position as a skating consultant to her late father’s hockey franchise, the Chicago Rebels, seems like a perfect fit. Until she’s assigned her first job: the man who skated into her heart as a teen and relieved her of her pesky virginity. These days, left-winger Vadim Petrov is known as the Czar of Pleasure, a magnet for puck bunnies and the tabloids alike. But back then... let’s just say his inability to sink the puck left Isobel frustratingly scoreless.


Vadim has a first name that means “ruler,” and it doesn’t stop at his birth certificate. He dominates on the ice, the practice rink, and in the backseat of a limo. But a knee injury has produced a bad year, and bad years in the NHL don’t go unrewarded. His penance? To be traded to a troubled team where his personal coach is Isobel Chase, the woman who drove him wild years ago when they were hormonal teens. But apparently the feeling was not entirely mutual.


That Vadim might have failed to give Isobel the pleasure that was her right is intolerable, and he plans to make it up to her—one bone-melting orgasm at a time. After all, no player can perfect his game without a helluva lot of practice.. 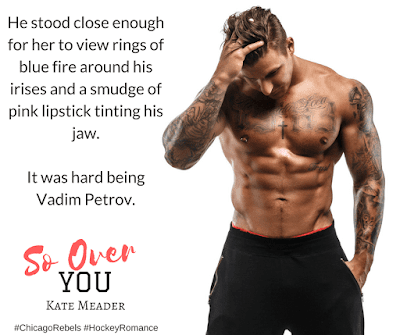 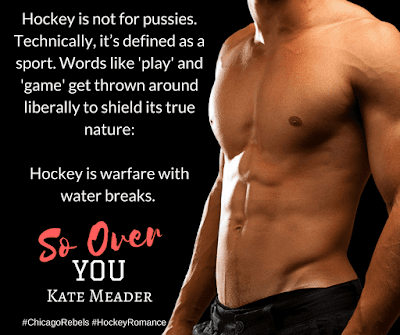 "The girl with the Blazing Skates has this boy on the ropes."

I couldn't wait to dive into So Over You. I'm a huge fan of Kate Meader's books. I knew the banter was going to be incredible and I was right!!! Kate's books always make me laugh out loud. The best part, her secondary characters are always memorable.

So what's this one about?

We met Isobel Chase in the first book in this series. She's one of the three sisters who are the co-owners of the Chicago Rebels. The franchise was a gift from their not-so-nice-father. Isobel used to play professional hockey herself until she was injured during a National game. She is now a coach and she's interested in coaching the players to improve their game. The first player she has to help is none other than the man who took her virginity.

Vadim Petrov has been traded into the Chicago Rebels. He suffered a knee injury and he's still not at one hundred percent. He has no choice but to let Isobel assist him. They have history, he was attracted to her and they had only one night together before her father interfered changing their destiny. When he learns that he was not able to make Isobel happy in bed all those years ago, he'll do anything to remedy the situation.

This was a fun read. It had plenty of great banter and funny situations. Both main characters were easy to like. Although, I had to warm to the Russian.

There was only one situation that I was not happy with. I believed Vadim made a huge mistake and I sided with Isobel, no questions asked.

If you enjoy romance and love hockey, this one is for you!

"Past, present, future, Bella, I am yours. That will never change."

He leaned in again, smelling of fame, privilege, and raw sex appeal. Discomfort at his proximity edged out the hormonal sparks dancing through her body.

“Does Moretti know that we have history? That you are the last person I wish to work with?”

Before she could respond, someone squealed, “Vadim!” A blond, skinny, buxom someone, who now wrapped herself around Vadim in a very possessive manner. “You said you’d be back with a dwinkie!”

Why did the lumberjack hotties always go for twigs instead of branches? Did it make them feel more virile to screw a pocket-sized Barbie?

But he didn’t need to know that. All he needed to know was that she had the power to return him to competitive ice. This was her best shot at making a difference and getting the Rebels to a coveted play-off spot. Vadim Petrov and his butt-hurt feelings would not stand in her way.

“Do you need to talk about it, Russian?”

She infused as much derision into the question as possible, so that the idea of “talking about it” made him sound a touch less than manly. Big, bad, brick-house Russians didn’t need to talk about the women who done them wrong.

“There is nothing to talk about,” he uttered in that voice that used to send Siberian shivers down her back. Now? Nothing more than a Muscovian flurry.

“Excellent!” Superscary cheerful face. “Regular practice is tomorrow at ten, so I’ll see you on the ice at 9 a.m. Don’t be late.”

Pretty happy with her exit line, she walked away.

A brute hand curled around hers and pulled her to the other side of the bar, out of the sight line of most of the VIP room. She found her back against a wall—literally and figuratively—as 230 pounds of Slavic muscle loomed over her.

He still held her hand.

If she weren’t so annoyed, she’d think it was kind of nice.

She yanked it away. “Who the hell do you think you are?”

“Who am I?” he boomed, and she prayed it was rhetorical. Unfortunately, no. “I am Vadim Petrov. Leading goal scorer for my first two years in the NHL. Winner of both the Kontinental and the Gagarin Cups. A man not to be trifled with. And you are, who, exactly? The daughter of a hockey great who was not so great when it came to running a team. The woman who can no longer play yet thinks she can offer ‘tips’ to me. To me! You may have pedigree, Isobel, but there is nothing I can learn from you.”

This arrogant, douchewaffle piece of shit! 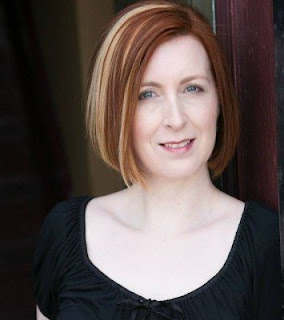 Originally from Ireland, USA Today bestselling author Kate Meader cut her romance reader teeth on Maeve Binchy and Jilly Cooper novels, with some Harlequins thrown in for variety. Give her tales about brooding mill owners, oversexed equestrians, and men who can rock an apron or a fire hose, and she’s there. Now based in Chicago, she writes sexy contemporary romance with alpha heroes and strong heroines who can match their men quip for quip. 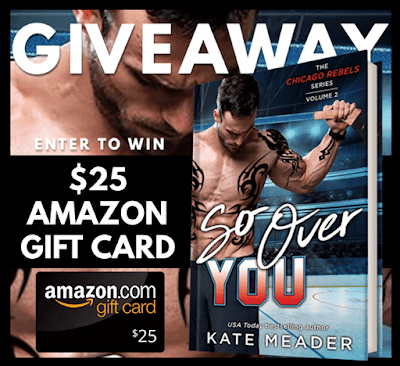 Kate Meader will be giving away a $25 Amazon gift card during release week. To enter, please go here!