Flame in the Dark by Faith Hunter 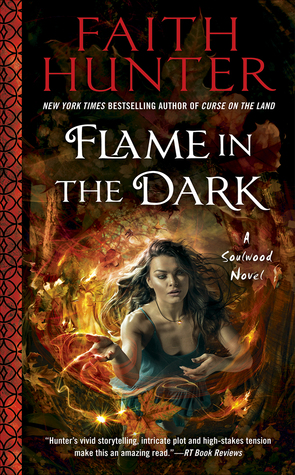 
Nell Ingram has always known she was different. Since she was a child, she’s been able to feel and channel ancient powers from deep within the earth. When she met Jane Yellowrock, her entire life changed, and she was recruited into PsyLED—the Homeland Security division that polices paranormals. But now her newly formed unit is about to take on its toughest case yet.

A powerful senator barely survives an assassination attempt that leaves many others dead—and the house he was visiting burns to the ground. Invisible to security cameras, the assassin literally disappears, and Nell’s team is called in. As they track a killer they know is more—or less—than human, they unravel a web of dark intrigue and malevolent motives that tests them to their limits and beyond.

I'm very happy that Faith Hunter decided to expand her Jane Yellowrock world to include Nell Ingram in it. She's a smart heroine who thinks before acting. Her strength comes from the land. Her power comes from Soulwood. Nell is able to communicate with the land and if necessary defend herself using it.

In this latest installment, Nell has finished spook school and now she's the new probie with Unit 18 for the PsyLED. She's getting used to her job and learning the natural interactions outside the Cloud Glory Church sect. The rest of the team is composed of Rick LaFleur, T. Laine, Occam, Jojo and Tandy.

At the beginning of the novel, Unit 18 gets assigned a new case. It has a paranormal component to it and Nell will be very useful in helping determine what is attacking several important families. The case is full of suspense. As always, Nell's intelligence and power of deduction are a great asset to the team. The baddies in this one gave me the creeps. Nasty things!

Flame in the Dark is full of character development. Not only for Nell but for the rest of the team too. Of course, the one which was the most impressive was Nell's. She's learning about her true power and how to use it. She's also helping her younger sister "Mud" understand she's not human either. Nell has learned from her past mistakes and she wants to protect Mud from her family and her own power.

Nell will also have to deal with other thorns in her way. There's the issue of the vampire tree who seems to be getting more powerful but also more demanding, and of what to do with evil Brother Ephraim, who seems ready to attack her.

In regards to the romance, slowly but surely Occam is becoming Nell's leading man. He's a very patient man who's smart enough to give Nell time to adjust to a life outside the "church". Yet,  he made his intentions towards her clear as day.

A complimentary copy was provided by Ace Books via Netgalley in exchange for an honest review.