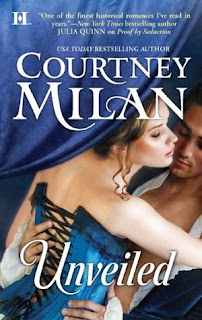 Ash Turner is seeking revenge. His distant cousin Lord Dalrymple, Duke of Parford Manor denied to help him, when poverty struck. He has been waiting for years to get the upper hand over the old bastard. Ash is able to prove that during his younger years the Duke married a woman and later on, he married a lady but he never annulled his first marriage. This made all his children from the second marriage bastards and unable to inherit.
Lady Anna Margaret has lost it all. Her name, her inheritance, her place in the ton. She stayed at Parford Manor to spy on Ash, disguised as her dying father's nurse. She thinks she will be able to find some proof that will reverse her misfortune.
She is prepared to hate Ash on the spot. But, he is completely different as to what she was expecting. He is nice to her and all others who worked for her father. He is very loyal to his family and she learns of all the mistreatments her father did to Ash's brothers.
I liked this book. I like that Ash's character was not set in stone. He is trying to keep his family together, since he feels guilty about leaving them and traveling to India in searching for fortune and power.
He is very honest with Marageret. Their love is believable. I liked what Margaret does at the end for the man that she loves.
4/5 Fangs
Posted by MrsLeif at 10:44 PM