Prince of Wolves (The Grey Wolves #1) by Quinn Loftis 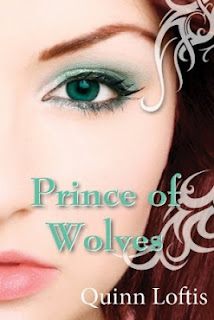 Jacque Pierce is a normal 17 year old teenager. She has two very close friends, Jen and Sally. She lives in Texas and is enjoying her last few weeks of summer before her senior year starts.
She is snoopy and when she finds out there is going to be an exchange student from Romania living in front of her house, she can't stop herself and starts spying. She is surprised when the boy arrives in a limousine and in shock when she starts hearing his voice in her head.
Fane is a Prince, literally. He is a Canis Lupis or Werewolf. He is an Alpha but had to leave his home with an urgent desire to get to Texas. When he arrives to the house of the people who will be living with him, he feels Jacque's stare an immediately recognizes her as his soul mate.
Soon Jacque finds out he is not your regular teenager and has a hard time understanding that her life may have been already decided for her. Things get worse when another werewolf claims her as his.
Fane will have to fight with Lucas to the death. Can Jacque survive all this anxiety?

I picked this book for the cover and because the reviews were good. I enjoyed most of it. One of the things I had a hard time dealing with, it's that everything happens in a couple of days. Her friends were immediately included in all the secrets. There was no relationship build up and Lucas came out of nowhere.