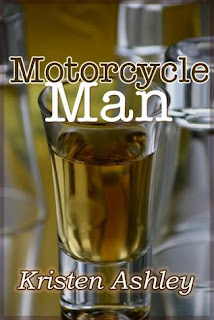 Tyra Masters is starting a new job as the office manager of  Chaos Motorcycle Club. The day before she starts she attends a party and meets the man of her dreams Tack Allen. After too many tequilas she persuades him to continue the conversation in the bedroom. But, after they share great sex, he tells her she can leave now. "Time to get your own bed , darlin'". One day later , she shows up for work and is told by none other than Tack that she can't work for him because they have slept together. She fights back and she wins by saying that when they slept together she was not an employee yet.
Tack has numerous problems going on. Some of the bikers are not happy with the Club. His ex-wife is being obnoxious and using his kids to get to him. The last thing he needs is "Red" complicating his life. But, when Red decides that she has had enough, suddenly he is not sure he wants to let her go.
The dialogue in this book is probably the best I read this year. He can be crude but he can also say the most unbelievable sweet things. At the beginning of the book, I didn't like him as much as I liked him in book 1, Mystery Man. By the end, this was my absolute favorite in the series. I cried a couple of times.
Just as a side note, Tack reminds me so much of JAX from Son's of Anarchy. Charlie Hunnam was my Tack.

I wish someone had told me earlier how good Kristen is as a writer.  I would buy any of her books.