The Witch's Daughter by Paula Brackston 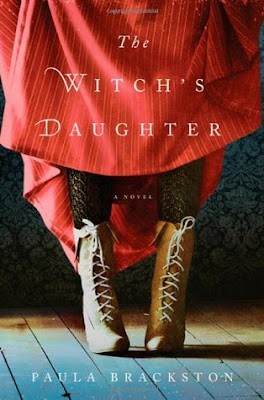 This book tells the story of Bess, sometimes called Elizabeth, Eliza, Elise. It starts in Batchcombe, Wessex in 1628 with Bess escaping the witch hunters.

The plague hits the small village where Elizabeth's family lives. Most of the town gets affected by it and her father, brother, and sister died from it. She gets ill as well but her mother who is a witch seeks help from a warlock by the name of Gideon Masters who brings her back to health.

Elizabeth's mother is hanged for witchcraft and she runs to Gideon for help. He teaches her how to use her powers and she becomes immortal but discovers that he is evil and escapes the town and Gideon. However, he follows her during different time periods.

We see her in London 1888 where she is a doctor, then as a nurse in Flanders 1917 and later in our time. In the present, she meets a teenager by the name of Tegan. Tegan wants to become a witch and starts learning the process.

During the centuries, Bess has escaped Gideon who can transform himself into anyone. In the present, he uses Tegan to get to Bess.

I thought the characters were predictable and Gideon is "pure evil". The end was abrupt and the resolution left me with questions. Bess never finds happiness.