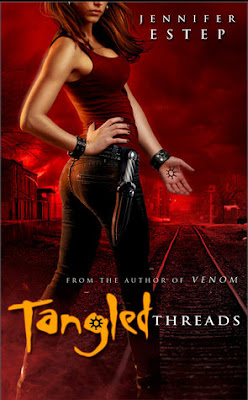 I enjoyed the first few books in this series.

Gin is a semi-retired young assassin. However, she has never killed a child or a pet. She can use two Elements: Ice and Stone.

Her nickname is the Spider, raised to be a killer after most of her family was killed by a Fire Elemental.

This installment finds her against a new threat – another assassin as herself has been hired to kill her. Someone who enjoys the kill. Her name is LaFleur and she is working for Gin’s family killer, Mab Monroe. Mab killed Gin’s sister and mom years ago.

The Spider has friends. She has a foster brother, Finn. Very attractive and rich. Also a good shoot and a ladies man. He may end up with Bria (Gin’s baby sister), Roslyn-a vampire who owns a club, Xavier who besides a cop and a bouncer is also in love with Roslyn. The Deveraux sisters Jo-Jo and Sophia (One uses her element to heal the other uses her element to dispose of bodies.

Most importantly it seems that she has found love with Owen who shares her hate for Mab since she is responsible for his family’s demise as well.

Tangled threads shows Gin’s doubts about her new relationship with Owen. Someone who understands her without criticism. I enjoyed every scene where they are together.

Not everything is roses. There is action, many men died by Gin’s hands. All bad men who deserve to die.

The Spider is a tough cookie but she is realizing she has friends who are willing to help her and maybe even a sister who can be there for her when the time comes to go for the big fish.