Scent of a Vampire by Jude Stephens 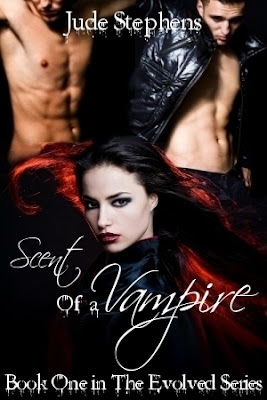 Scent of a Vampire
The Evolved #1
Jude Stephens

Olivia (true name Orenda) is a divorced physical therapist going on a long weekend trip with her best friend Janel to Atlantic City. She has self esteem issues due to her prior marriage. She has recently started noticing she has a "curse". She can tell there is a musky scent associated with death.

When they get to the hotel she notices two sexy men. She gets invited by Alex to his hotel and is accompanied to it by Roberto, an Italian vampire. The hotel is attacked and both men are there to protect her.

Both vampires know she is a Sensay. Olivia will get more powers after she turns thirty. Better vision, hearing, etc. Since she is able to smell death she notices both men have this scent and they convince her they are vampires.

At the beginning of the story it looks like she is falling for Alex. Once Alex goes missing, she starts a relationship with Roberto.

The enemies of supernatural beings are the Guardians, who at first tried to recruit her then they try to kill her.

We meet second characters, one specially is very likable. His name is Leeds and he is a devil.

Olivia is from a Native American descent. Her spirit guide presents as a wolf.

I finished this book and I enjoyed some parts of it. However, some parts were redundant. At the end of the book, you don't know if she picked the right guy to stay with.