The Heat by Heather Killough-Walden 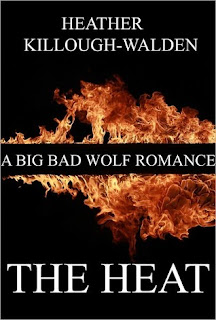 Lily St. Claire is returning home after 10 years away. She moved away trying to forget about Daniel Kane, her best friend's brother.

Daniel realizes she is his mate as soon as he catches her scent. Recently named the Chief of Police of Baton Rouge he is investigating a serial killer who has Lily in his sites.

But, Daniel has competition. Malcolm Cole, the well known writer who is an alpha werewolf wants Lily as his mate since she is a Dormant, a woman who can bear werewolf children.

Malcolm has been cursed by a Roma gypsy during WW2 when he was serving as a British Spy in Germany.

Hunters have been around for years eliminating Werewolves and they seem to be targeting Daniel's friends and family.

My problem with this book starts with the many kidnappings Lily faces, the way the men behave around her. It is one thing to be a dominant alpha werewolf, another to be an abuser. The romance is not believable. Daniel seems extremely immature and I was rooting for Malcolm most of the time since he was mistakenly cursed. Then, he disappears from the book all together.