The Strip (The Big Bad Wolf #2) by Heather Killough-Walden 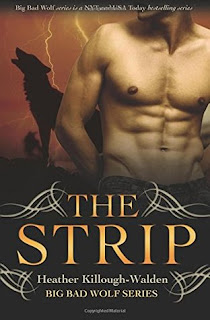 This is the second book in the Big Bad Wolf series.
This time our protagonist is Claire St James, she goes by Charlie to her friends. She is part of a band and has been hired to play exclusively in a Casino in Las Vegas by the powerful Gabriel Phelan.

Our two alphas fighting for Claire, who is a dormant female born werewolf are Malcolm Cole (the "bad guy" from book 1) and Gabriel Phelan.

Claire has been dreaming of both alphas for years. She tends to attract violent men. She does have a good friend with "benefits" Jesse her attorney who later becomes her guardian. While traveling to another murder, Malcolm is able to catch her scent and is able to mark her using a fake tattoo parlor. However, as in book one she gets kidnapped by Phelan who has been her self defense trainer for years. She has known him under the name of David Reese. He is able to shapeshift.

Gabriel is a sadist who had enjoyed hurting her during many years under the excuse of self defense training sessions. Once he decides to mark her and realizes that Cole found her first, he enjoys torturing her.

I liked Malcolm in The Heat and I liked that he was able to find some peace and happiness. But, I found the torture scenes and the constant threat of rape repetitive and distasteful. And the love scenes unbelievable.