Tempt Me by Shiloh Walker 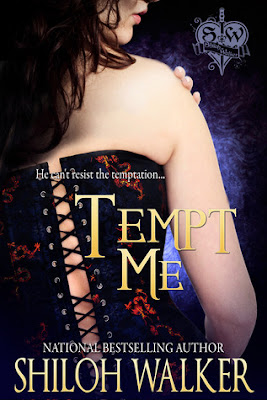 This is a short book.

Roxanne "Rocki" is the owner of a lingerie shop called Lush and Lace. She sells corsets for different type of female bodies. She is actually the one who designs them.

She meets Cole Stanton when he comes to her store with his fiancee, Mara. They will be the competition since Mara is opening her own lingerie store and wants to hire the designer of the beautiful corsets.

Rocki refuses to reveal the name since she had an instant dislike for Mara why is arrogant and rude. She does notice Cole and wonders why such an attractive man is about to married such an angry person.

Cole feels instant attraction to Rocki and he realizes his fiancee has changed into a mean spirited woman.

They attend Rocki's fundraiser in memory of her late husband who was a cop who died in the line of duty five years ago. The engagement is broken and Cole pays for a date with Rocki.

In the middle of all this, we learned that Rocki had a stalker before her marriage and he is back in her life and is threatening her.

This was an easy read. I enjoyed it. I do wish it was longer.