The Queen's Weapons by Anne Bishop
The Black Jewels #11 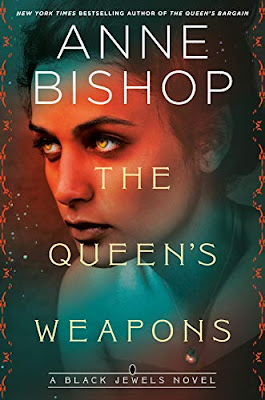 Enter the dark and sensual realms of the Black Jewels, a world where power always has a price, in this sweeping story in the New York Times bestselling fantasy saga.
They are Warlord Princes, men born to serve and protect. They are the Queen's Weapons, men born to destroy the Queen's enemies--no matter what face that enemy wears.
Daemonar Yaslana knows how to be bossy yet supportive--traits he shares with his father, the Demon Prince, and his uncle, the High Lord of Hell. Within his generation of the family, he assumes the role of protector, supporting his sister Titian’s artistic efforts and curbing his cousin Jaenelle Saetien’s more adventurous ideas. But when a young Eyrien Queen, someone Titian thought was a friend, inflicts an emotional wound, Daemonar's counterattack brings him under the tutelage of Witch, the Queen whose continued existence is known only to a select few.
As Daemonar is confronted by troubling changes within and around the family, he sees warnings that a taint in the Blood might be reappearing. Daemonar, along with his father and uncle, must uncover the source of a familiar evil--and Daemon Sadi, the High Lord of Hell, may be forced into making a terrible choice.

The Queen's Weapons was a great addition to the Black Jewels series!
A dark seed has had years to move around the realm and her tentacles are closing in around unsuspecting victims. The Queen's Weapons will need to stop this taint before another Dorothea emerges.
The kids have grown. What are they doing?
Titian has found the strength to request going to a new school to further her painting.
Daemonar just like his father (Lucivar) and his uncle (Sadi) is a Warlord Prince. He is loyal to Witch and to his family. He will protect and serve. As a child, he was always there to help Jaenelle. However, Jaenelle is not acting like her old self. He wants to keep an eye on her and his sister.
Jaenelle wants to forge her own path. She wants nothing to do with the name she was given. She believes her new friends at the school are guiding her into the right aristo ways.
Zoey, a Queen, who as a child befriended Daemon Sadi and later on became friends with Titian and Jaenelle will be attending the same school.
A line is drawn and each of them will pick up a side.
Who will survive the cold fury of the Lord of Hell?
~~
I was so happy to be back in this world. I love that Deamonar has become such a great warrior. He is ready to help and defend. He also listened and learned. He understood Sadi and he loves Witch. He was a great big brother too.
Jaenelle was such a disappointment. I don't think she really learned her lesson. She hurt everyone with her words and her actions. She was so spoiled and rotten. She knew what she was doing was wrong but she still did it. Her punishment was too small.
Other thoughts:
-I love how strong Jillian has become. Kiss Kiss.
-Surreal was less impressive in this one but I think it's because Witch is more prevalent in it.
-I liked Zoey but I didn't love her. She might be something better in the next book.
-My hats off to Mrs. Beale. She sure showed them what she could do in the kitchen🔪.
-Love all the Kindred in this installment.
-Daemon and Lucivar were vigilant and ready to pounce.
I'm still not sure how Jaenelle can redeem herself enough but I'm ready to read it.
Cliffhanger: No
4/5 Fangs
A complimentary copy was provided by Ace Books via Netgalley in exchange for an honest review.
Posted by MrsLeif at 4:38 PM