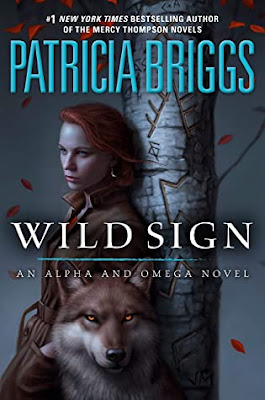 Mated werewolves Charles Cornick and Anna Latham must discover what could make an entire community disappear — before it's too late — in this thrilling entry in the #1 New York Times bestselling Alpha and Omega series.
In the wilds of the Northern California mountains, all the inhabitants of a small town have gone missing. It's as if the people picked up and left everything they owned behind. Fearing something supernatural might be going on, the FBI taps a source they've consulted in the past: the werewolves Charles Cornick and Anna Latham. But Charles and Anna soon find a deserted town is the least of the mysteries they face.
Death sings in the forest, and when it calls, Charles and Anna must answer. Something has awakened in the heart of the California mountains, something old and dangerous — and it has met werewolves before.

Back to the Mercyverse!! One of my favorite fantasy worlds ever!
As an Alpha and Omega novel, we know Charles and Anna are frontpage. Ana, the Omega that has stabilized Bran's pack of unstable powerful werewolves and Charles, Bran's son, the enforcer. If Charles shows up, you know someone has misbehaved and death is close. Charles is only different around Ana. She sees parts of him that no one else does.
So what's Wild Sign about?
A new threat.
The FBI comes knocking (literally) on Charles and Ana's door. They're asking for help. A whole community that was living in the northern mountains of California has disappeared. No one has heard from them and the daughter of one of them has sounded the alarm. Her father used to communicate with her regularly and now there has been no communication whatsoever. So why ask Ana and Charles for help? Well, the community was staying on Leah's property!
Bran can't leave the pack so he sends Anna, Charles, and Tag to investigate instead. As soon as they get there, Carles can feel the magic. Witches have been there but someone older is lurking. All types of questions are coming up: What happened to the community? Are they still alive? What's the connection with Leah's past?
Well, I was not expecting this one. Leah and her past. Leah and her losses. Leah and the choices that were taken away from her and the ones she had to live with. It made my dislike for her simmer down a little bit. Don't get me wrong, I'm still not a fan and will never be. I've got a long memory and her behavior towards Mercy is still unforgivable.
Wild Sign has some scary parts. I didn't want Anna to lose what she had gained over the years. But, I shouldn't have worried. Ana is a survivor and a fighter and Charles is deadly to their enemies. I love them as a couple and Patricia Briggs proves that there is no need for a love triangle for it to work.
I love Tag in this one. He brought humor to the story. We all know he is lethal but Anna pacifies him in all the right ways. I was laughing when he introduced himself as the henchman.
I wonder if Patrica Briggs was checking to see if we were awake enough with the last part and that epilogue! It brought in a huge development and so many repercussions to come to so many: Bran, Sherwood, Samuel, Coyote, Mercy. You name it.
Cliffhanger: No
4/5 Fangs
A complimentary copy was provided by Ace Books via Netgalley in exchange for an honest review.
Posted by MrsLeif at 1:34 PM