A ​Court of Silver Flames by Sarah J. Maas
A Court of Thorns and Roses #4 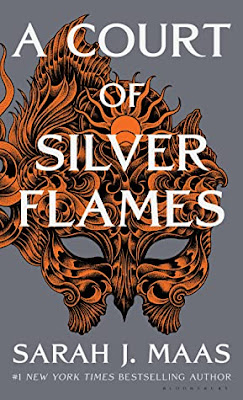 Nesta Archeron has always been prickly-proud, swift to anger, and slow to forgive. And ever since being forced into the Cauldron and becoming High Fae against her will, she's struggled to find a place for herself within the strange, deadly world she inhabits. Worse, she can't seem to move past the horrors of the war with Hybern and all she lost in it.
The one person who ignites her temper more than any other is Cassian, the battle-scarred warrior whose position in Rhysand and Feyre's Night Court keeps him constantly in Nesta's orbit. But her temper isn't the only thing Cassian ignites. The fire between them is undeniable, and only burns hotter as they are forced into close quarters with each other.
Meanwhile, the treacherous human queens who returned to the Continent during the last war have forged a dangerous new alliance, threatening the fragile peace that has settled over the realms. And the key to halting them might very well rely on Cassian and Nesta facing their haunting pasts.
Against the sweeping backdrop of a world seared by war and plagued with uncertainty, Nesta and Cassian battle monsters from within and without as they search for acceptance-and healing-in each other's arms.

Not what I was expecting.
I had to push myself to continue reading ACoSF. Nesta was so rude and mean for the first or almost half of the book that I wanted to quit so many times. The constant self-pity and anger were detrimental to my enjoyment.
I believe in part, this was an editing issue. The same things were repeated over and over. A book that was more than seven hundred pages with good editing could have easily been 400.
The worse mistake I believe SJM did was the way she wrote Rhys in this one. In order to make us feel bad about Nesta, SJM decided to change Rhy's character into a horny teenager with little respect for his wife that it was ok to hide a huge thing from her. This is not the Rhys of prior books. (I still love you, Rhys. What SJM did to you was undeserving. I’m going to forget all the awful things she wrote you said or did as to not damage your character in my mind.)
Other things that made me think: WTH?
-The way Elaine is portrayed. She is nothing but a wimp.
-Amren: She was cruel when she never has been before.
-Morgan was almost not in the picture.
-Poor Az is always described as aloof and alone.
-The amount of smut. Yes, I can't believe I'm saying this but it was just too much. It felt unnecessary,
Since I talked about the things I didn’t like let me say the things that I did love about ACoSF.
I love the training sessions between all the women and Cassian and Az.
I love that Nesta creates her own family just like Feyre did.
I love the last third of the book. The route to self-discovery and the fighting were hugely entertaining.
I love that I can still see Feyre and Rhys together again ❤️.
Cliffhanger: No
3/5 Fangs
Posted by MrsLeif at 4:39 PM