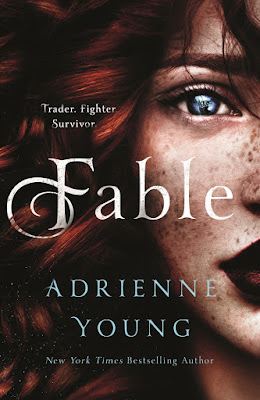 For seventeen-year-old Fable, the daughter of the most powerful trader in the Narrows, the sea is the only home she has ever known. It’s been four years since the night she watched her mother drown during an unforgiving storm. The next day her father abandoned her on a legendary island filled with thieves and little food. To survive she must keep to herself, learn to trust no one, and rely on the unique skills her mother taught her. The only thing that keeps her going is the goal of getting off the island, finding her father, and demanding her rightful place beside him and his crew. To do so Fable enlists the help of a young trader named West to get her off the island and across the Narrows to her father.
But her father’s rivalries and the dangers of his trading enterprise have only multiplied since she last saw him, and Fable soon finds that West isn't who he seems. Together, they will have to survive more than the treacherous storms that haunt the Narrows if they're going to stay alive.
Welcome to a world made dangerous by the sea and by those who wish to profit from it. Where a young girl must find her place and her family while trying to survive in a world built for men. Fable takes you on a spectacular journey filled with romance, intrigue, and adventure.

“Keep your knife where you can reach it.Never, ever owe anyone anything.Nothing is free.Always construct a lie from truth.Never, under any circumstances, reveal what or who matters to you.”

Surprisingly entertaining!
Fable has been left to survive on the island of Jeval. She was only fourteen when her father, Saint, the famous trader of the Narrows left her there. For four years Fable has been dredging to keep herself fed. Her intention has been to accumulate enough coin to ask for passage on a boat to take her back to her father and ask for what is hers.
During the last two years, she has traded her stones with West, the Marigold's trader. When Fable's life is in danger, she asks West for help off of the island. She soon discovers that West has his secrets but so does she.
Great beginning to the series. The descriptions were so well done that I could picture the waves, the birds, the sails, and the jewels.
I was intrigued by Fable's mother Isolde and also for their affinity to the gems. I like Fable, West, and the rest of the crew of the Marigold.
I want to know more about Saint. I wish I could get a prequel and learn how Saint met Isolde.
I can't wait for the second book that comes out in just a few days.
One last thing, the cover. What a beautiful one!
Cliffhanger: Yep!
4/5 Fangs
Posted by MrsLeif at 4:39 PM