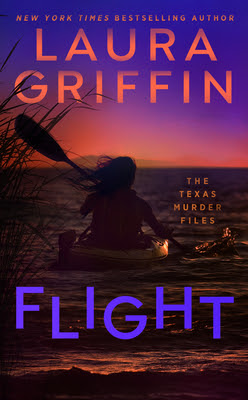 When former forensic photographer Miranda Rhoads moves to the seaside town of Lost Beach, she's decided to make her living as a wildlife photographer and put crime scenes behind her. But her plans are quickly upended when one morning, she comes across a couple sleeping in a canoe, entwined in an embrace. Looking closer, she realizes the man and woman aren't asleep – they've been murdered.
Detective Joel Breda sets out to find answers – not only about the unidentified victims in the marshy death scene, but also about the aloof and beautiful photographer who seems to know more about his investigation than he does.
As they begin to unravel the motivation of a merciless serial killer, Miranda and Joel must race against the clock to make an arrest before the killer can find them first.

As a fan of her Tracers series, I always welcome a book by Laura Griffin.
In Flight we get to know two new characters: Miranda Rhoads and Joel Breda.
The novel begins with Miranda, a photographer, taking pictures of birds at sunrise. After her perfect shot is done, she encounters two dead bodies arranged on a boat. The coupled looked staged. A feather is found at the crime scene. Miranda, who is a CSI on a break, calls the cops after taking pictures of the bodies to preserve the scene since rain is on its way.
Joel Breda is the lead detective of the small town of Lost Beach. He’s in charge of finding the killer. He knows that Miranda can be of help, Her expertise could be invaluable to the investigation. He will do anything to convince her to join his team.
But the closer they get to the answers, the clearer it is that Miranda’s life is in danger.
Who is trying to hurt her?
Laura Griffith writes great romantic suspense. I’m always ready to jump into the story because I know I will relish it.
The Flight was no different. Enjoyable characters that I wanted to learn more about. Of course, there are always secondary characters that make you think: I want to read about them next!
Cliffhanger: No
4/5 Fangs
A complimentary copy was provided by Berkely via Netgalley in exchange for an honest review.
Posted by MrsLeif at 4:32 PM