A Million Reasons Why by Jessica Strawser 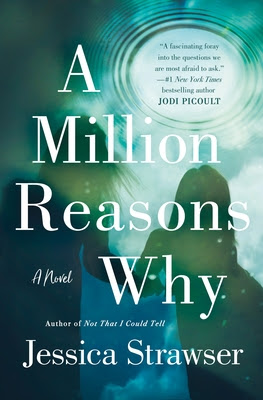 When two strangers are linked by a mail-in DNA test, it’s an answered prayer―that is, for one half-sister. For the other, it will dismantle everything she knows to be true.
But as they step into the unfamiliar realm of sisterhood, the roles will reverse in ways no one could have foreseen.
Caroline lives a full, happy life―thriving career, three feisty children, enviable marriage, and a close-knit extended family. She couldn’t have scripted it better. Except for one thing:
She’s about to discover her fundamental beliefs about them all are wrong.
Sela lives a life in shades of gray, suffering from irreversible kidney failure. Her marriage crumbled in the wake of her illness. Her beloved mother and lifelong best friend passed away. She refuses to be defined by her grief, but still, she worries about what will happen to her two-year-old son if she doesn’t find a donor match in time.
She’s the only one who knows Caroline is her half-sister. That Caroline may be her best hope for a future. But Sela’s world isn’t as clear-cut as it appears―and one misstep could destroy it all.
After all, would you risk everything to save the life of the person who turned yours upside down?
From the moment Caroline meets Sela, both must reexamine what it really means to be family, the depths of a mother’s love, and the limits and the power of forgiveness

A Million Reasons Why was a sad story but a believable one.
With the help of a DNA kit, Sela is able to locate her half-sibling, Caroline. Sela is in need of help. She has chronic kidney failure. She feels tired, unable to do much exercise and sometimes feels like she can't take care of her child. Her best friend and her ex-husband are pushing her to do the Big Ask. To ask her half-sibling whom she has never met for a kidney. Sela feels conflicted but she also wants to live.
Caroline had no clue that her husband's Christmas gift to her family was going to be the one responsible for creating chaos. Caroline's world implodes when Sela's email arrives. She is shocked, to say the least. She can't believe that one of her parents was not faithful. It shocks her to her core. Worse, she and Sela are almost the same age.
Sela's email also opens old wounds for Caroline. Sela lives in the town Caroline thought about moving to with her boyfriend, Keaton many years ago. When a job doesn't pan out, Keaton breaks her heart without a good explanation. Yes, she is now married to Walter, she has three children and Walt is attentive, sweet and a great dad but Caroline still thinks about what it could have been.
The road for Sela and Caroline is not an easy one. So many secrets affecting them all. Some are hard to forget and to forgive but can they find a way to do so?
A Million Reasons Why was a well-written and well-developed novel. I was rooting for both sisters to find a way to each other and also I really wanted Sela to get a new kidney. At times, I felt like Caroline had it all and Sela was due for something good to happen to her. I was not happy with the decisions taken by Caroline's parents but I guess, it works in the end.
Cliffhanger: No
4/5 Fangs
A complimentary copy was provided by St. Martin's Press via Netgalley in exchange for an honest review.
Posted by MrsLeif at 9:52 PM