The Good Lie by A.R. Torre 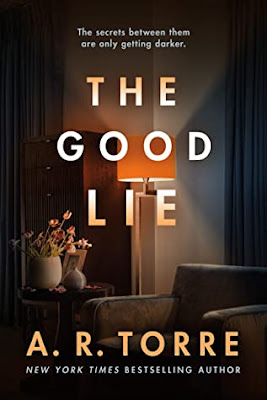 Six teens murdered. A suspect behind bars. A desperate father. In a case this shadowy, the truth is easy to hide.
Six teenagers dead. Finally, the killer behind bars. But are the games just beginning?
Psychiatrist Dr. Gwen Moore is an expert on killers. She’s spent a decade treating California’s most depraved predators and unlocking their motives—predators much like the notorious Bloody Heart serial killer, whose latest teenage victim escaped and then identified local high school teacher Randall Thompson as his captor. The case against Thompson as the Bloody Heart Killer is damning—and closed, as far as Gwen and the media are concerned. If not for one new development…
Defense attorney Robert Kavin is a still-traumatized father whose own son fell prey to the BH Killer. Convinced of Thompson’s innocence, he steps in to represent him. Now Robert wants Gwen to interview the accused, create a psych profile of the killer and his victims, and help clear his client’s name.
As Gwen and Robert grow closer and she dives deeper into the investigation, grave questions arise. So does Gwen’s suspicion that Robert is hiding something—and that he might not be the only one with a secret.

5 stars for this new psychological thriller by Alessandra Torre.
Six teenagers have been murdered. They have been sexually assaulted and their sexual organs have been removed and discarded like trash. So it's shocking when the seventh victim returns to his home, hurt but alive, after weeks of his absence. He was able to escape and is pointing the finger at his high school teacher, Randall Thompson!
Dr. Gwen Moore is a psychiatrist. She treats the worse kind of patient. She treats the ones who have urges to harm others. Gwen tries to guide them into a place where they can self-control these fantasies. However, a recent client and his wife are dead and now the police want to talk to her about it. At the same time, Robert Kavin, a defense attorney, wants her to come up with a profile for the Bloody Heart Killer and Randall. There is one caveat, Robert is the father of the sixth victim and he believes the man is innocent.
But how can he be sure?
I have to tell you as soon as I opened the first page I was pulled into the story. There is no way you can put this book down. I absolutely love everything about it. The dark setting, the intrigue, the twist, Gwen, her job, her psych friend, her pet.
Everything about it was perfect!
Cliffhanger: No
5/5 Fangs
A complimentary copy was provided by Thomas & Mercer via Netgalley in exchange for an honest review.
Posted by MrsLeif at 4:43 PM