The Push by Ashley Audrain 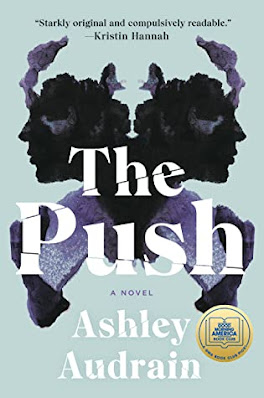 A tense, page-turning psychological drama about the making and breaking of a family–and a woman whose experience of motherhood is nothing at all what she hoped for–and everything she feared.
Blythe Connor is determined that she will be the warm, comforting mother to her new baby Violet that she herself never had.
But in the thick of motherhood’s exhausting early days, Blythe becomes convinced that something is wrong with her daughter–she doesn’t behave like most children do.
Or is it all in Blythe’s head? Her husband, Fox, says she’s imagining things. The more Fox dismisses her fears, the more Blythe begins to question her own sanity, and the more we begin to question what Blythe is telling us about her life as well.
Then their son Sam is born–and with him, Blythe has the blissful connection she’d always imagined with her child. Even Violet seems to love her little brother. But when life as they know it is changed in an instant, the devastating fall-out forces Blythe to face the truth.
The Push is a tour de force you will read in a sitting, an utterly immersive novel that will challenge everything you think you know about motherhood, about what we owe our children, and what it feels like when women are not believed.

R.A.W.
Raw: The feelings The Push brought out in me. The feelings Ashley Audrain masterful made me have about Blythe. The raw pain Blythe narrates as she is drowning in pain.
This novel is disturbing in the right kind of way. No one says motherhood is easy. We all know it is not. But giving birth to a child who doesn't love you and might be evil is not something that is spoken about or thought about. After all, babies are cute and sweet. Or are they? Some might say they are very hard work with the sleepless nights, the tantrums, the teething, the terrible twos but how about the complete emotional disconnection with one parent. Is it possible?
The main character is Blythe. She came from a line of women who failed at being mothers. Either from depression or just a lack of maternal instinct or a mixture of both. She tells us a story of how she met the man she fell in love and after marrying him, he started pushing her to get pregnant. Blythe is not sure she wants to be a mother but she knows she wants to make her husband happy.
Once the baby comes, nothing goes the right way. Little by little, Blythe starts to believe that Violet, her daughter, has something wrong with her. She's calculating, manipulative and cold. Violet only has eyes for her father. While he is home, she's a perfect angel but when she is alone with Blythe there is never peace. Is Violet evil or is Blythe suffering from post-partum psychosis?
Chilling with its frankness, The Push is a novel that I will never forget.
Cliffhanger: No
5/5 Fangs
Posted by MrsLeif at 1:31 PM