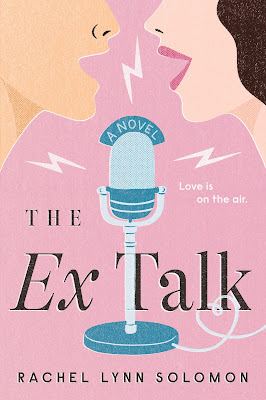 Shay Goldstein has been a producer at her Seattle public radio station for nearly a decade, and she can't imagine working anywhere else. But lately it's been a constant clash between her and her newest colleague, Dominic Yun, who's fresh off a journalism master's program and convinced he knows everything about public radio.
When the struggling station needs a new concept, Shay proposes a show that her boss green-lights with excitement. On The Ex Talk, two exes will deliver relationship advice live, on air. Their boss decides Shay and Dominic are the perfect co-hosts, given how much they already despise each other. Neither loves the idea of lying to listeners, but it's this or unemployment. Their audience gets invested fast, and it's not long before The Ex Talk becomes a must-listen in Seattle and climbs podcast charts.
As the show gets bigger, so does their deception, especially when Shay and Dominic start to fall for each other. In an industry that values truth, getting caught could mean the end of more than just their careers.

So what happens when you're forced to work with your nemesis and then find out, he's not as bad as you thought he was?
The perfect recipe for a great work romance novel!
Shay Goldstein has spent the last decade as the producer of a radio show. She is content to work behind the scenes since she doesn't believe she has the voice to be on the radio. Her dad and Shay spent many days playing at having their own talk show and despite the years he has been gone, she still misses him dearly. When he died, working at the radio was the one thing that helped her get out of bed every day.
In regards to her personal life, she's currently unattached. Her mom is about to get married and her best friend is thinking of moving away. She's stressed with these changes. Then, she learns that the station might have to let people go. They need a new show to bring in listeners.
Shay pitches an idea at the next work meeting. How about exes working together and talking about relationship issues? Her boss loves the idea and when he sees her bickering with Dominic Yun, who has a master's in journalism, he decides to pair them as the hostesses of the new show.
It all begins with a lie, but soon Shay and Dominic realize they have chemistry and a shared attraction but can things work out for them?
The Ex-Talk by Rachel Lynn was a sweet story with the perfect balance of romance and drama. Engaging characters and a perfect blend of diversity and inclusion.
And I have to agree with Shay, forearms can be sexy.
Cliffhanger: No
4.5/5 Fangs
A complimentary copy was provided by Berkely via Netgalley in exchange for an honest review.
Posted by MrsLeif at 7:54 PM