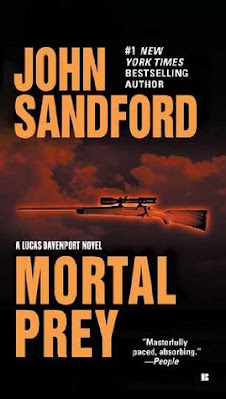 Years ago, Lucas Davenport almost died at the hands of Clara Rinker, a pleasant, soft-spoken, low-key Southerner, and the best hitwoman in the business. Now retired and living in Mexico, she nearly dies herself when a sniper kills her boyfriend, the son of a local druglord, and while the boy's father vows vengeance, Rinker knows something he doesn't: The boy wasn't the target-she was-and now she is going to have to disappear to find the killer herself. The FBI and DEA draft Davenport to help track her down, and with his fiancie deep in wedding preparations, he's really just as happy to go-but he has no idea what he's getting into. For Rinker is as unpredictable as ever, and between her, her old bosses in the St. Louis mob, the Mexican druglord, and the combined, sometimes warring, forces of U.S. law enforcement, this is one case that will get more dangerous as it goes along. And when the crossfire comes, anyone standing in the middle won't stand a chance....Filled with the rich characterization and exceptional drama that are his hallmarks, Mortal Prey proves that John Sandford just keeps getting better.

This is one of the times when I wish Lucas wasn't so lucky.
Who doesn't remember Clara Rinker? She was the one that got away. A killer for hire that was created and used by the St. Louis mob. She was the best at what she did, then she met Lucas, even danced with him, and she was almost able to beat him. She disappeared without a trace and the FBI had nowhere to go.
Years later, Clara is back on the FBI watch. Clara has been hiding in Mexico, she was in love and was pregnant when someone shot and killed her boyfriend, the son of a drug lord. They shoot her too and she loses her baby. The FBI will ask Lucas for help in tracking her. They believe she is coming back to the USA to seek revenge and they know he can help capture her and put her away for good. Lucas who is in the middle of a house renovation and wedding planning jumps at the opportunity to have another go at Clara.
This one was so well done! We know some of the FBI characters and Lucas meets a few more ex-cops that help with the investigation. The pace is fast and the twists are good ones.
Clara's character made me sad. She has lost everything and she has been used and manipulated for years. She was turned into a killer after years of abuse by men. She never had a chance.
Darn Iowa Kid.
Cliffhanger: No
4/5 Fangs
Posted by MrsLeif at 4:28 PM