The Rose Code by Kate Quinn 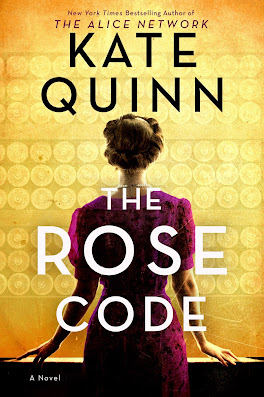 The New York Times and USA Today bestselling author of The Huntress and The Alice Network returns with another heart-stopping World War II story of three female code breakers at Bletchley Park and the spy they must root out after the war is over.
1940. As England prepares to fight the Nazis, three very different women answer the call to mysterious country estate Bletchley Park, where the best minds in Britain train to break German military codes. Vivacious debutante Osla is the girl who has everything—beauty, wealth, and the dashing Prince Philip of Greece sending her roses—but she burns to prove herself as more than a society girl, and puts her fluent German to use as a translator of decoded enemy secrets. Imperious self-made Mab, product of east-end London poverty, works the legendary codebreaking machines as she conceals old wounds and looks for a socially advantageous husband. Both Osla and Mab are quick to see the potential in local village spinster Beth, whose shyness conceals a brilliant facility with puzzles, and soon Beth spreads her wings as one of the Park’s few female cryptanalysts. But war, loss, and the impossible pressure of secrecy will tear the three apart. 1947. As the royal wedding of Princess Elizabeth and Prince Philip whips post-war Britain into a fever, three friends-turned-enemies are reunited by a mysterious encrypted letter--the key to which lies buried in the long-ago betrayal that destroyed their friendship and left one of them confined to an asylum. A mysterious traitor has emerged from the shadows of their Bletchley Park past, and now Osla, Mab, and Beth must resurrect their old alliance and crack one last code together. But each petal they remove from the rose code brings danger--and their true enemy--closer...

This is one of the times I didn’t want to let go of the characters. My attachment to them was tangible.
After spending days listening to these three women, I just didn't want to leave and never hear from them again.
Meet the women:
Osla, A Canadian-born debutant, the smart and pretty socialite who wants more in life. In 1939, her friend introduces her to a young Navy officer, Phillip of Greece and she becomes his girlfriend.
Mab, "Queen Mab", who has fought for an education and wants to find a man who can provide for her and her sister Lucy.
Then there is Beth. She's already considered a spinster. Her mother treats her poorly and she uses the Bible as a physical punishment. Her self-esteem is non-existent.
All three will work at Bletchley Park, the mansion used as the center of the allied code-breaking during the Second World War. Osla will find a place as a linguist. Mab working with fixing the machines used for code-breaking and Beth as a cryptanalyst.
Sworn to secrecy by the Official Secrets Act of 1939, these three women will become fast friends until there is a betrayal. A betrayal that will leave Beth at Clockwell's sanitarium.
Then in 1947, the year that Phillip marries a Queen, a coded message will be delivered to Osla and Mab asking for help. It is a message that neither woman can dismiss before a third one loses her mind for good.
Kate Quinn does a fantastic job at describing these women, their timelines, and their stories. I was wholeheartedly invested in them. I felt their happiness, their sorrows, and their pain.
The secondary characters were excellent too. Mr. Grey, Harry, Boots, all a great addition to the story.
As I get near the end of my review, I can forget to mention the amazing job that Saskia Maarleveld did as a narrator. She was fantastic. I think this book was perfect as an audiobook. 5 stars to her.
One last thing, and just for those curious minds. Osla Benning was a real person. She was fluent in German and she did work at BP.
How many years until I can see the movie?
Cliffhanger: No
5/5 Fangs
A complimentary copy was provided by Harper Audio via Netgalley in exchange for an honest review.
Posted by MrsLeif at 1:27 PM