Too Good to Be True by Carola Lovering 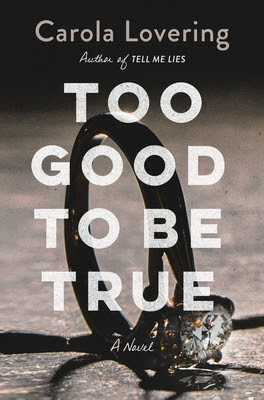 From Carola Lovering, the author of Tell Me Lies, comes Too Good to Be True, an emotionally nuanced psychological suspense, and an obsessive, addictive love story, for fans of Lisa Jewell and The Wife Between Us.
Skye Starling is overjoyed when her boyfriend, Burke Michaels, proposes after a whirlwind courtship. Though Skye seems to have the world at her fingertips—she's smart, beautiful, and from a well-off family—she's also battled crippling OCD ever since her mother's death when she was eleven, and her romantic relationships have suffered as a result.
But now Burke—handsome, older, and more emotionally mature than any man she's met before—says he wants her. Forever. Except, Burke isn't who he claims to be. And interspersed letters to his therapist reveal the truth: he's happily married, and using Skye for his own, deceptive ends.
In a third perspective, set thirty years earlier, a scrappy seventeen-year-old named Heather is determined to end things with Burke, a local bad boy. Inspired by the sophisticated mother of her babysitting charges, Heather vows to leave her impoverished hometown behind and make a better life for herself in New York City. But can her adolescent love stay firmly in her past—or will he find his way into her future?
On a collision course she doesn't see coming, Skye throws herself into wedding planning, as Burke's scheme grows ever more twisted. Meanwhile, three decades in the past, Heather's longed-for transformation finally seems within reach. But of course, even the best laid plans can go astray. And just when you think you know where this story is going, you'll discover that there's more than one way to spin the truth.

I enjoyed this one so much! Yes, the ending was an unbelievable one but I went with it.
Too Good To Be True was a page-turner suspense with a great twist that I did not see coming. I actually had an "Oh wow" moment.
Skye Starling is a young woman who is working as an editor. She is also a very rich woman. She has a trust that would make anyone more than comfortable in life. Yet, even though it looks like she has everything or she could buy it if she wanted to, she is unlucky in love. She has OCD and is unable to stop her compulsions of knocking on all pieces of wood or kissing clocks. So the men she has met so far, fall short 100%. Some of them total losers for sure. And then, Skye meets Burke Michaels.
Burke is a man in his forties. He looks like a successful businessman who is also handsome and interesting. He is a recovering addict who doesn't hide it. Burke doesn't care about Skye's compulsions. He understands her. There is of course one tiny problem. He is already married!!!
I think that in order to get the maximum enjoyment of Too Good To Be True, is to not read the blurb. It has way too much information and since I went in blind, I had a blast reading it.
Skye had all my sympathy. Dealing with a debilitating OCD is hard. Her meds were not completely useful but at least her therapist was a great one.
I won't comment on Burke because I don't want to give out any spoilers. Just know my friends that you might want to have an open mind about the ending.
Cliffhanger: No
4/5 Fangs
A complimentary copy was provided by St. Martin's Press via Netgalley in exchange for an honest review.
Posted by MrsLeif at 7:40 PM