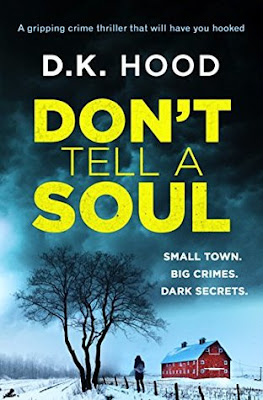 The floor was stone cold on her bare skin. Her heart pounded in her chest. ‘Not a soul knows where I am,’ she thought as she took in the darkness around her. And then she heard his footsteps…
When a body is found stuffed into a barrel at a garbage dump, covered in long red lacerations, Detective Jenna Alton and her new deputy, David Kane, rush to the scene.
Nothing ever happens in the small American town of Black Rock Falls, so Jenna believes the victim must be one of two recent missing persons, and she fears for the life of the other.
Both were strangers to the town, but there’s nothing else to link them. Jenna knows someone must have seen something, but no one’s talking; how well does she really know the people around her?
Then a disturbing clue makes Jenna suspect a connection with other disappearances in the town’s history. Just when she begins asking the right questions, she realises she’s being followed. Is she next on the killer’s list?
In a race against time, Jenna and David must unlock the dark secret at the heart of the town, before it’s too late…

“I seem to attract crime”.

My curiosity has been piqued.
So where do you go when you had plastic surgery and Witness protection has to place you somewhere in the States? Well, you move to Black Rock Falls, Montana of course.
David Kane is the new Deputy Sheriff at Black Rock Falls. The first night he gets there, he's witness to a car accident. A truck has tried to run over a car. To his surprise, he discovers that the victim's car is none other than his new boss, Sheriff Alton.
Sheriff Alton is not what he was expecting. She seems too young for her job however she's very confident and knowledgeable. He also believes she's hiding something or hiding from someone.
His job is also not what he was expecting. He was expecting to relax in a new town without major drama but he soon discovers that the town is full of surprises. Two people have gone missing without a trace and then a body is found at the garbage dump. It's up to him and Sheriff Alton to discover the truth behind these disappearances.
I really like the beginning of this series. I thought both characters were very likable and interesting. Both were hiding in plain sight and you know that at some point their past is going to come looking for them.
I'm intrigued, so I will continue reading the next installment.
Cliffhanger: No
3.5/5 Fangs
Posted by MrsLeif at 6:19 PM