In the Deep by Loreth Anne White 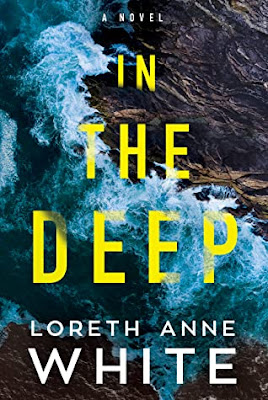 I hope you don’t find him. And if you do, I hope he’s dead and that he suffered…
Real-estate mogul Martin Cresswell-Smith is the best thing that has ever happened to Ellie. After her daughter’s devastating death, a divorce, and an emotional breakdown, he’s helped her move as far as possible from the grief, the rage, and the monsters of her past. Ellie imagines her new home with Martin in an Australian coastal town will be like living a fairy tale. But behind closed doors is another story—one that ends in Martin’s brutal murder. And Ellie seems almost relieved…
Naturally, everyone thinks Mrs. Cresswell-Smith is guilty.
Senior Constable Lozza Bianchi has reasonable doubt. She sees evidence of a twisted psychological battle and a couple who seemed to bring out the worst in each other—adultery, abuse, betrayal, and revenge. If anything Ellie says can be believed, that is. As the case takes twist after spiraling twist, Lozza can’t shake the gut instinct that she’s being manipulated. That Ellie is hiding something. That there are secrets yet to surface. Lozza has no idea.

First off, I love Loreth Ann White's books. She is a must-buy for me. Her books always flow naturally and take me to a big reveal that inevitably leaves me with my mouth wide open.
In the Deep, Mrs. White brings to life a very broken female character, Ellie.
Ellie Tyler is the well-known heiress of the Hartley empire in Canada. When the story begins, she has been invited to dinner by her father at their hotel. After having a blow-up with him, she and her friend Dana, decide to start drinking at the bar. After Dana leaves, Ellie is going to the lady's room when she meets a man that makes her feel alive again. After a short courtship, Ellie marries Martin Cresswell-Smith and move to Australia to start a new life.
Ellie's past has not been a bed full of roses. Her mother committed suicide when Ellie was nine. Her father lacked empathy. Her daughter, who was just three years old, drowned at sea. Her first husband cheated, sending her into the path of benzodiazepines, alcohol, and a very public mental breakdown which ends with her being institutionalized.
After meeting Martin, Ellie believes she can finally achieve some well-deserved happiness.
But just a few months into their marriage, Martin is found tortured and murdered and the prime suspect is none other than Mrs. Martin Cresswell-Smith. The jury must decide if she is guilty or not.
__
Ellie frustrated me. Between her lorazepam and her drinking, she was a lost cause. It irritated me to no end that she was never sure of what was happening around her or to her since she repeatedly was in a benzo and booze stupor. She was unreliable, I wanted to shake her and scream at her: "pay attention, you dimwit."
As always, between a masterful scenery description and a hard to put down storyline, Mrs. White has created another excellent book with an OMGosh twist.
In my opinion and If I want to be hypercritical, I would say that the last scene with Senior Constable Lozza Bianchi was unnecessary.
Cliffhanger: No
4/5 Fangs
Posted by MrsLeif at 9:23 AM