One Day in December by Josie Silver 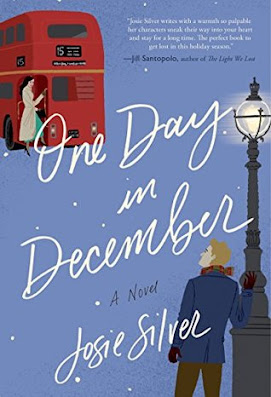 Two people. Ten chances. One unforgettable love story.
Laurie is pretty sure love at first sight doesn't exist anywhere but the movies. But then, through a misted-up bus window one snowy December day, she sees a man who she knows instantly is the one. Their eyes meet, there's a moment of pure magic... and then her bus drives away.
Certain they're fated to find each other again, Laurie spends a year scanning every bus stop and cafe in London for him. But she doesn't find him, not when it matters anyway. Instead they "reunite" at a Christmas party, when her best friend Sarah giddily introduces her new boyfriend to Laurie. It's Jack, the man from the bus. It would be.
What follows for Laurie, Sarah and Jack is ten years of friendship, heartbreak, missed opportunities, roads not taken, and destinies reconsidered. One Day in December is a joyous, heartwarming and immensely moving love story to escape into and a reminder that fate takes inexplicable turns along the route to happiness.

Can you fall in love with just a glimpse?
Laurie is on a bus when she stares at the green eyes of the young man at a bus stop. For a second, she believes he's going to jump into the closing doors of the bus to be with her but the second passes and as the bus retreats, she blows him a kiss.
For a full year, she looks for "bus boy", the man she is falling in love with. Then, her best friend, Sarah is throwing a party and she is bringing her boyfriend who she is madly in love with and you might guess who it is...yes bus boy is Sarah's boyfriend, Jack.
Over the next decade, nothing is easy for this trio.
And now, my unpopular opinion ahead
Did I like Laurie? Absolutely. My huge problem was with Jack. The way he behaved with both women rubbed me the wrong way. He was hurtful to Laurie and I never felt like he demonstrated his love for her in a romantic way. I never believed she was his "100%" while Laurie was all in and pining for him for years. Where was his grand gesture?
In addition, Sarah, Amanda and Oscar deserved better.
Lastly, I listened to some parts of the book and Jack came out as a womanizer, arrogant, selfish guy.
I know many loved this book but I'm not one of them. Disliking the main character in a romance book is a complete downer for me. How can I root for their happiness when I don't think the hero deserves this heroine?
Cliffhanger: No
2/5 Fangs
Posted by MrsLeif at 10:23 AM