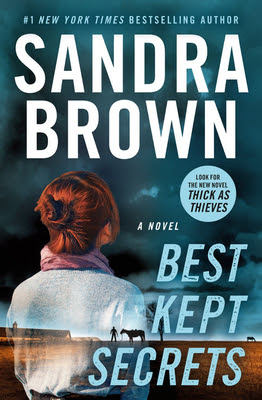 In this steamy thriller from #1 New York Times bestselling author Sandra Brown, a savvy attorney in small-town Texas will stop at nothing to catch the man who murdered her mother.
Alexandra Gaither is a beautiful lawyer who finally has the power to get what she's always wanted: justice. Armed with new evidence that could lead to an arrest and a conviction, Alex revisits the remote Texas town where her mother died twenty-five years ago.
There she confronts the three powerful men who were with her mother the night she died: her former lover, his best friend, and the father figure to them both. Each is charming, each is a suspect, and each has secrets to hide. But none of them can stop Alex's determined search for the truth.
Alex's relentless investigation creates controversy and excitement in this small community. And as she uncovers decades-old intrigues, someone capable of clever lies and remorseless acts decides she must be stopped. Now, with a one-month deadline from the attorney general to either wrap up the case or drop it for good, Alex must work diligently to catch her mother's killer . . . and find a way to stay alive.

Beware!
Spoilers ahead!
This was a massive disappointment.
I’m a huge fan of Sandra Brown’s work but this book is, by all means, my least favorite.
To be honest, I can’t believe she wrote this. Although, she did write it in the 1980s.
The Best Kept Secrets is about Alexandra Gaither, a lawyer who comes to her birth town to uncover the truth about her mother’s murder when she was a baby.
Celina, Alex's mother, was stabbed to death in a barn stable and a man, Gooney Bud, who had a learning disability was blamed for it. Alex is sure this is not the case since the doctor who treated the man said he never showed any aggressive behavior and in his professional opinion, he had no doubt he was innocent.
Meet the suspects:
Angus, the patriarch.
Junior, his son, the charmer.
Reede, the town’s Sheriff and Celina's ex-boyfriend.
Alex wants justice and she has been given a month to prove it.
I found many things wrong with this book. Let me share a few of my thoughts:
First, the men and the treatment of women:
Angus has sex with his unwilling wife while thinking about his mistress.

"That she responded to him out of a sense of obligation rather than passion didn't stop him from wanting her; it might even have enhanced his desire. Angus enjoyed a challenge."

"She winced slightly when he entered her. He pretended not to see her grimace. He tried not to sweat or make a sound or do anything that she would consider nasty and unpleasant. He saved all his raunchiness for the widow lady he supported in the neighboring county."

Junior has sex with his ex-wife in a rough manner and feels elated that he has power over her and that he is hurting her, so basically rape.

"Her dismay, her debasement made him feel powerful. His release came from subjugating her, not from the sex itself."

The hero of the story, Reed, throws disgusting comments at the heroine all the time. Also, he's having sex with the town’s madam while he shows interest in the heroine. Lastly, he was Celina's boyfriend but he has no problem having sex with Alex despite having known her as a baby.

"You thought I was hot enough last night," he sneered."Or did you stay a technical virgin this long by going down on all your dates?"

I’m shaking my head. How can anyone think he was romantic?
Second, the heroine:
Alex is immediately taken by the Sheriff despite his nasty attitude towards her. He’s rude, arrogant, dismissive, and aggressive with her. Yet, she has stars in her eyes from the moment she meets him. Furthermore, Alex is self-serving, immature, and a push-over.
I won't ever understand the premise that because he mistreats you, he must love you. Alex kept on coming back to Reede and pretty much has to beg him to tell her he loves her. Give me a break!
Third, the mystery surrounding Celina’s death:
The killer was a no-brainer. It was spelled in big letters if you ask me.
I have no idea how I was able to finish this book. So many times I wanted to DNF it.
I’m glad I’m done with this backwoods place and all these cruel men.
Cliffhanger: No
1/5 Fangs
Posted by MrsLeif at 4:56 PM