A Dark and Secret Place by Jen Williams 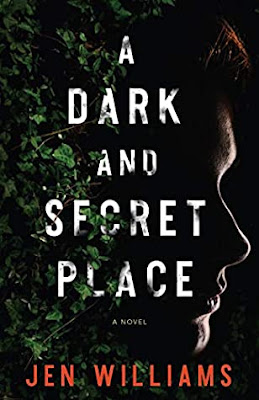 When prodigal daughter Heather Evans returns to her family home after her mother's baffling suicide, she makes an alarming discovery--stacks and stacks of carefully preserved letters from notorious serial killer Michael Reave. The "Red Wolf," as he was dubbed by the press, has been in prison for over twenty years, serving a life sentence for the gruesome and ritualistic murders of several women across the country, although he has always protested his innocence. The police have had no reason to listen, yet Heather isn't the only one to have cause to re-examine the murders. The body of a young woman has just been found, dismembered and placed inside a tree, the corpse planted with flowers. Just as the Red Wolf once did.
What did Heather's mother know? Why did she kill herself? And with the monstrous Red Wolf safely locked inside a maximum security prison, who is stalking young women now? Teaming up with DI Ben Parker, Heather hopes to get some answers for herself and for the newest victims of this depraved murderer. Yet to do that, she must speak to Michael Reave herself, and expose herself to truths she may not be ready to face. Something dark is walking in the woods, and it knows her all too well.

A serial killer is targeting young women. After he kills them, he arranges flowers onto the corpses. He cares more about them dead than alive.  The gruesome discoveries mimicked the same pattern once used by serial killer, Michael Reave, the Red Wolf. Yet, Michael is in prison, so who is killing them?
Heather Evans comes back home after her mother commits suicide. She’s saddened by her loss despite not being close to her mother. She left home when she was sixteen.
While cleaning her mother’s things, Heather makes a discovery. She discovers correspondence between her mother and the famous serial killer the Red Wolf. She doesn't understand her mother's connection with him and she starts investigating her mother's past. A past she might not want to find out after all.
I hate to say it but I didn’t enjoy this one. Not sure if it was the slow delivery or it was because I didn’t think that the characters were interesting enough.
In my opinion, something was lacking with the premise.
Cliffhanger: No
2/5 Fangs
A complimentary copy was provided by Crooked Lane Books via Netgalley in exchange for an honest review.
Posted by MrsLeif at 6:52 PM