It's Always the Husband by Michele Campbell 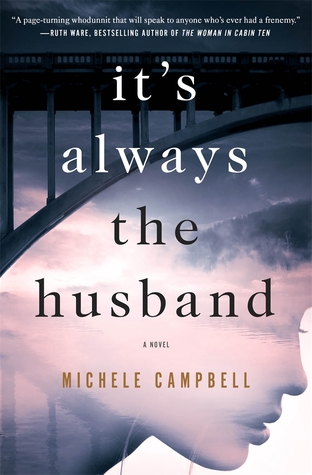 Kate, Aubrey, and Jenny. They first met as college roommates and soon became inseparable, even though they are as different as three women can be. Twenty years later, one of them is standing at the edge of a bridge . . and someone else is urging her to jump.

How did things come to this?

As the novel cuts back and forth between their college years and their adult years, you see the exact reasons why these women love and hate each other—but can feelings that strong lead to murder? Or will everyone assume, as is often the case, that it’s always the husband?

"Go ahead and jump. You know you want to."

Three women cross paths as roommates in Carlisle college and their friendship during their freshman year becomes entangled with sex, drugs and dark secrets. A couple of decades later they are all back together in the same town where their lives were all marked by tragedy.

We meet Kate Eastman who was the popular rich girl who always got what she wanted but who had contemplated taking her own life. There is Aubrey Miller, the poor girl who just wants to fit in and will do whatever Kate wants as long as she is part of Kate's world. Last, there is Jenny Vega, the smart one. The one who wants a future and will study to make her dreams come true. But, in the present one of them is dead and suspicions are cast upon the ones who are left behind.

It's Always the Husband centers the suspense in learning more about these women and their time during college and why one of them is not longer alive. Did she deserve it?? and who had the guts to do it?

There were plenty of reasons to hate Kate. She was self-centered and didn't care about hurting anyone else's feelings. She was going to do whatever pleased her and darn the rest. Aubrey was like a lost puppy, the one who wanted to be part of the group, falling into drugs for the sake to fit in but years later much calmer and collected. Jenny was the one with a head over her shoulders, she was also the one with the most to lose in the present time.

To be honest, I didn't care for any of these women. They were all bad in my opinion. They all had done awful things to each other and even though they claimed to be friends, they were the complete opposite. When the mystery was finally solved it didn't surprise me. I saw it coming.

There were a couple of things that bothered me about the story. Although at the beginning we're given Owen Rizzo's POV, later on, his story line just disappeared to never be heard of again. Also, we're left wondering about the fate of the women once the dust has settled.

Overall, I thought the book had a good writing course, I just wished I had connected with one of these characters so I could root for them.

A complimentary copy was provided by St. Martin's Press via Netgalley in exchange for an honest review.