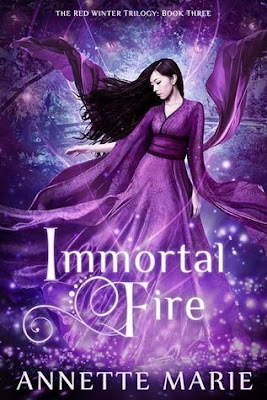 Once, Emi believed the heavenly gods were righteous and wise, while the earthly yokai spirits were bloodthirsty and evil. But with a traitorous deity poised to destroy her world, and the yokaistanding as humanity's only defense, the lies of her upbringing have toppled to reveal a far more terrifying reality.Despite the looming threat, Emi can't escape her greatest distraction: Shiro, the fox yokai who has so deftly claimed her heart for his own. Soon—too soon—she will have to break the curse that binds his magic and memories. And once the ancient power inside him awakens, the yokai she loves will be changed forever.As the earthly gods gather to wage war against the heavens, Emi and Shiro must gamble everything to turn the tide against their immortal, all-powerful foes. Together, they will find a way to save her world—even if it means losing each other.

Immortal Fire was a book I was greedily anticipating and also dreading because I didn't want to see this series come to an end. Even though I am sad to see this series end, I thought the author did a great job wrapping up this story. Immortal Fire had a wonderful balance of romance, action, tension, and world building. This book was a book that sucked me in and didn't let me go until long after it ended.


Throughout this series, I really grew to like the main character, Emi. Emi developed into such a strong, cunning, resourceful, caring, and noble woman. I admired the way she mature through this series, and how that really shined in this book. The only thing about her that kind of bothered me in this book was how many times she needed to be saved. It became a little tedious in my opinion. I understood that she wasn't as powerful as the other characters, but it would have been nice to not to have the repetitive plot point of her needing help getting out of mortal danger.


Shiro was just as swoon-worthy as ever in this book. Even though I never really got over the fact that he had some fox body parts, I still fell completely in love with him and was incredibly attracted to him. His personality really shined in this book. I sympathized with him throughout this book because we went through a lot. It hurt my heart to see him go through some of the pain he experienced. My only big issue with Shiro was that sometimes he was a little too "macho alpha male" for my taste. I thought his protectiveness was cute, but at times it was a tad overbearing.
The romance in this book killed me. Shiro and Emi are freaking perfect together. I thought the author did a great job balancing the romance with the other plot points. The tug and pull of Emi and Shiro's relationship tugged at my heartstrings. I wanted them together SO BADLY. Shiro and Emi are adorable together, and I thank the author for bringing such a cute couple into my life.
The plot of this book was exciting and action packed. A lot of questions were answered, and I thought the author did a great job at tieing up loose ends. The ending of this book made me feel all the feels. I really liked the way the author ended the story for all the amazing characters in this book. Even though I was sad to say goodbye to the characters, I was happy with where they all ended up.

Posted by MissDaemon at 3:06 PM