All the Lies We Tell by Megan Hart 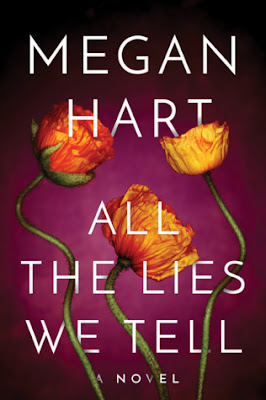 Everyone knew Alicia Harrison’s marriage to Ilya Stern wouldn’t last. They’d grown up on a remote stretch of Quarry Street, where there were two houses, two sets of siblings, and eventually, a tangled mess of betrayal, longing, and loss. Tragedy catapulted Allie and Ilya together, but divorce—even as neighbors—has been relatively uncomplicated.

Then Ilya’s brother, Nikolai, comes home for their grandmother’s last days. He’s the guy who teased and fought with Allie, infuriated her, then fled town without a good-bye. Now Niko makes her feel something else entirely—a rush of connection and pure desire that she’s been trying to quench since one secret kiss years ago. Niko’s not sticking around. She’s not going to leave. And after all that’s happened between their families, this can’t be anything more than brief pleasure and a bad idea.

"I'm going to miss you,
Every single day."

I'm a fan of Megan Hart. She has a way of threading and delivering unique stories. That's why I like her books.

In her latest novel, All the Lies We Tell, Megan Hart, brings us a mixture of what could have been loaded with past mistakes and hidden desires between two neighbor families.

Alicia Harrison and her sister Jennilyn have always had a friendship with their neighbor's sons: Ilya and Nikolai Stern. Growing up they did most things together until tragedy strikes. During a time of unresolved grief, Alicia and Ilya decided to elope and get married. Their marriage lasted a decade but their divorce was amicable. But, nothing has really changed. They are still living in the same place, as neighbors and they are also business partners. Then another tragedy brings old players back into town. Nikolai is back and Alice questions her attraction towards him. She knows it could certainly end up being a mistake and she has made enough of those. Theresa, Ilya and Nikolai's step-sister, also comes back. Even Galina, Nikolai and Ilya's mother, makes an appearance too. Neither son has had a good relationship with her but they can't push her away.

As you can tell, there was plenty of drama to keep me entertained. I thought Ilya was egocentric and thoughtless. He drank too much and he was way too angry. He hurt everyone around him. Theresa is still a mystery to me. What is she hiding? Why is she back?

It was easy to root for Alice and Nikolai. Their story was a lot of missed opportunities. It started as the boy who mistreats a girl because he likes her and it progressed to something that they couldn't avoid any longer. I just wished there had been more groveling from Nikolai. Alice was my favorite character. I don't know, but I thought she deserved a chance at happiness. She had pretty much lived her life trapped in the past and her grief.

"You don't get over it. You just get through it."

One thing which wasn't clear to me is what happened to Jennilyn. Was there foul-played involved? I wish I knew if it was just an accident or if her secret relationship brought her own demise. I'm hoping the next book gives me the answers I need.

Overall, I thought All the Lies We Tell had an enjoyable pace with a good narrative, multiple POVs, and alternating past and present chapters.

A complimentary copy was provided by Montlake via Netgalley in exchange for an honest review.