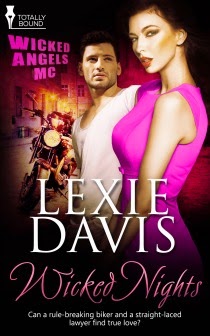 Addison Pierce is a lawyer and she never loses a case. This is the main reason the Angels Motorcycle Club has hired her to defend their president Mason Vaughn.

Addison has always followed the law. The law is all she knows. Even her dad is a judge.

Mason Vaughn is the President of the MC. He has spent six months in prison and he is finally free. He has spent many months with his lawyer and he has developed an attraction towards her. He knows he should stay away but when a rival club attacks her, he does what he needs to do to keep her safe.

Addison and Mason are from completely different worlds, and staying together is not easy.

I was pleasantly surprised with this ARC. I liked the characters. Don't get me wrong - when they were trying to push one another away, I wanted to throw my Kindle at the wall. In the end, the story worked for me.

Our heroine, Addison, was strong, funny and likable.

"Do I get a cut with patches? Maybe one that says ‘badass lawyer’?”

Mason was sexy, had a strong personality and was loyal. They made a good couple.

“Yeah, well, I’m not the smartest guy around here.” His hands went to his pants. “Plus, you said it was romantic and showed commitment.”