We are so excited for the Release Day Launch of Monica Murphy's INTOXICATED!! INTOXICATED is a novella in her The Billionaire Bachelors Club Series published by Avon Books, an imprint of HarperCollins. It is just $.99 right now!! 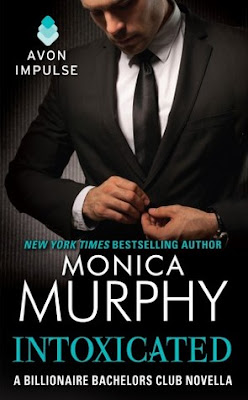 EXCERPT: Our lives are changing completely. It won’t just be me and Ivy anymore. We’ll have someone to take care of. Someone who solely depends on us. “Oh, Archer,” Ivy says, pulling me from my thoughts. Turning to face her, I see that her eyes are filling with tears and her face looks ready to crumple. I go to her, grabbing hold of her hands and giving them a squeeze. “What’s wrong, baby?” “I feel bad.” A little sob escapes her as she shakes her head. I tug her in as close as I can, slinging my arm around her waist. “I’m going to ruin Gage’s wedding.” “No you’re not. It’s going to be one of the most memorable weddings ever. No one will forget this day,” I say, smoothing my hand over her hair. I want her reassured, not worrying about wedding plans. Everything we know is going to change in mere hours. “Exactly. It’s supposed to be Gage and Marina’s day and instead it’s going to turn into our day. Our child’s day. How selfish are we?” “We’re not selfish. We can’t help it if you’re going into labor right now. It’s not like we did it on purpose.” I shed the rest of my clothes quickly, throwing on a pair of jeans and a T-shirt. “Speaking of labor, we need to get going. Are you ready? Get some shoes on, babe.” I give her a gentle push out of my embrace and toward the closet door across our bedroom. “We? Who’s the one who’s about to give birth?” Ivy mutters as she shuffles toward the closet. A little snort escapes her. “You won’t have anything to do with this labor stuff, Archer. This is all on me.” “And I think you’re going to do an amazing job. You’re the strongest women I know,” I say. At those words, my wife promptly bursts into tears.

About INTOXICATED: New York Times bestselling author Monica Murphy wraps up her sexy Billionaire Bachelors Club series with a wedding to remember. But this time, they’re not bachelors anymore, and the groom … is one of them. It’s Gage and Marina’s wedding day, but wedded bliss seems a long way off: Ivy’s just gone into labor. Marina’s missing her matron of honor. And Bryn’s giving Matt the silent treatment. It’s up to Archer, Gage, and Matt to make sure this day goes off without a hitch. But between brides and babies, there’s the not-so-little issue of the million-dollar bet to attend to. If only they can figure out who won … and who’s paying up. Is everyone a winner? Or will someone leave broke—and brokenhearted?

ABOUT MONICA MURPHY:
New York Times and USA Today bestselling author Monica Murphy is a native Californian who lives in the foothills below Yosemite. A wife and mother of three, she writes New Adult and contemporary romance for Bantam and Avon. She is the author of One Week Girlfriend and Second Chance Boyfriend.
Website ** Blog ** Facebook ** Twitter
INTOXICATED on Goodreads ** Monica MurphyGoodreads

Posted by Anonymous at 8:00 AM