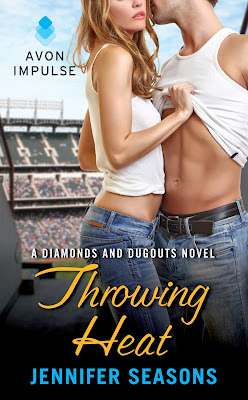 BLURB
The sexy baseball players of Jennifer Seasons' Diamonds and Dugouts series slide into home with a final fiery romance worthy of a World Series win. Nightclub manager Leslie Cutter has never been one to back down from a bet. So when Peter Kowalskin, pitcher for the Denver Rush baseball team, bets her that she can't keep her hands off of him, she's not about to let the arrogant, gorgeous playboy win. Especially when the prize could put her business on the map. She's got this in the bag, just so long as she can stay out of his arms … and his bed. Peter struck out once before with Leslie, but this bet is sure to be the second chance he's been waiting for. Determined to stoke the passion he knows is there, he'll do anything to win—even if it means playing a little dirty. But as things heat up, this combustible pair will have to decide just how much they're willing to wager on one another … and on a future that just might last forever.

With the World Series just around the corner, fans of baseball and steamy romances alike will LOVE Jennifer Seasons final installment in the Diamonds and Dugouts series, THROWING HEAT (available now, Avon Impulse, e-book ISBN: 9780062271488, $1.99). The team’s own World Series may be on the horizon, but with a second chance at love at his fingertips, there’s more at stake for sexy pitcher Peter Kowalskin than just the game! Fans have been eagerly awaiting Peter and Leslie’s story, and there’s no denying the passion between this combustible pair. Filled with playful antics, steamy scenes, and an exhilarating love story, THROWING HEAT slides into home as the final fiery romance of the Diamonds and Dugouts series—one worthy of a World Series win.

a Rafflecopter giveaway
Posted by MrsLeif at 10:12 PM