When We Were Bright and Beautiful
by Jillian Medoff 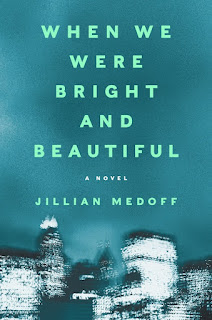 The acclaimed, bestselling author of This Could Hurt returns with her biggest, boldest novel yet--an electrifying, twisty, and deeply emotional family drama, set on Manhattan's glittering Upper East Side, that explores the dark side of love, the limits of loyalty, and the high cost of truth.
You can have everything, and still not have enough.
Cassie Quinn may only be twenty-three, but she knows a few things. One: money can't buy happiness, but it's certainly better to have it. Two: family matters most. Three: her younger brother Billy is not a rapist.
When Billy, a junior at Princeton, is arrested for assaulting his ex-girlfriend, Cassie races home to Manhattan to join forces with her big brother Nate and their parents, Lawrence and Eleanor. The Quinns scramble to hire the best legal minds money can buy, but Billy fits the all-too-familiar sex-offender profile--white, athletic, and privileged--that makes headlines and sways juries.
Meanwhile, Cassie struggles to understand why Billy's ex Diana would go this far, even if the breakup was painful. And she knows how the end of first love can destroy someone: Her own years-long affair with a powerful, charismatic man left her shattered, and she's only recently regained her footing.
As reporters converge outside their Upper East Side landmark building, the Quinns gird themselves for a media-saturated trial, and Cassie vows she'll do whatever it takes to save Billy. But what if that means exposing her own darkest secrets to the world?

Unpopular opinion ahead.
I was disappointed with this one. Not in the writing style but with the outcome of the plot.
I would say the pace at the beginning of the book was slow and as I got to know the characters, it was hard for me to like any of them.
The book begins with Cassie. She is in New Haven when she gets a call from her brother Nate. Their younger sibling, Billy has been accused of raping his ex-girlfriend. Her parents Lawrence and Eleanor are doing damage control. Lawrence is trying to find a lawyer and Eleanor is controlling the press. It doesn't help that Billy is a jock, white and privileged. The Quinns are worth over 700 million so when the press gets a whiff of the accusation against Billy, their lives are going to become a circus.
As the book progresses we learn more about them and the secrets they are keeping.
This courtroom drama didn't do it for me. There were some things that disgusted me which is probably why I didn't like the characters. The main twist, I was able to guess so even the shock value was missing for me. I know a lot of my friends have loved it so check out their reviews too.
I do want to mention that Marin Ireland did an amazing job with the audio narration.
Cliffhanger: No
3/5 Fangs
A complimentary copy was provided by Harper via Netgalley in exchange for an honest review.
Posted by MrsLeif at 5:53 PM