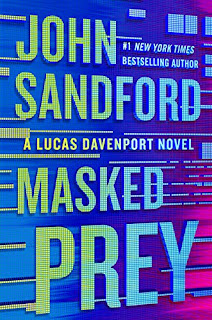 Lucas Davenport investigates a vitriolic blog that seems to be targeting the children of U.S. politicians in the latest thriller by #1 New York Times-bestselling author John Sandford.
The daughter of a U.S. Senator is monitoring her social media presence when she finds a picture of herself on a strange blog. And there are other pictures . . . of the children of other influential Washington politicians, walking or standing outside their schools, each identified by name. Surrounding the photos are texts of vicious political rants from a motley variety of radical groups.
It's obviously alarming--is there an unstable extremist tracking the loved ones of powerful politicians with deadly intent? But when the FBI is called in, there isn't much the feds can do. The anonymous photographer can't be pinned down to one location or IP address, and more importantly, at least to the paper-processing bureaucrats, no crime has actually been committed. With nowhere else to turn, influential Senators decide to call in someone who can operate outside the FBI's constraints: Lucas Davenport.

Lucas Davenport gets called to fix major problems. This time, he is called when a website on the dark web is found by the daughter of a senator. The website has her picture and other kids' pictures and the common denominator is that they are all children of politicians. The fear is that someone is tracking these children for nefarious purposes.
Lucas with the help of US Marshalls, Rae and Bob, and FBI agent Jane Chase start tracking the leads before any children are hurt. The clock is ticking and Lucas might not be able to stop it.
I love this series but with Mask Prey, it was hard to keep my interest. It was way too political for my taste. What I do love is the writing per se and Ferrone is a wonderful narrator. I wouldn't listen to anyone else playing Lucas than him. In addition, I love reading the interactions between Lucas with his fellow Marshalls and Jane. The dark humor, the funny side, and the sense of desperation when the leads are not forthcoming are some of the things that made this series such a good one.
I'm finally close to catching up. Ocean Prey is next...
Cliffhanger: No
3/5 Fangs
Posted by MrsLeif at 5:40 PM