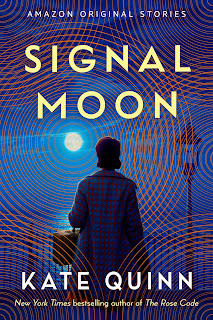 From the New York Times bestselling author of The Diamond Eye comes a riveting short story about an impossible connection across two centuries that could make the difference between peace or war.
Yorkshire, 1943. Lily Baines, a bright young debutante increasingly ground down by an endless war, has traded in her white gloves for a set of headphones. It’s her job to intercept enemy naval communications and send them to Bletchley Park for decryption.
One night, she picks up a transmission that isn’t code at all—it’s a cry for help.
An American ship is taking heavy fire in the North Atlantic—but no one else has reported an attack, and the information relayed by the young US officer, Matt Jackson, seems all wrong. The contact that Lily has made on the other end of the radio channel says it’s…2023.
Across an eighty-year gap, Lily and Matt must find a way to help each other: Matt to convince her that the war she’s fighting can still be won, and Lily to help him stave off the war to come. As their connection grows stronger, they both know there’s no telling when time will run out on their inexplicable link.

I loved The Rose Code so when I saw my audible telling me this was available, I purchased it but I didn't have time to listen until today.
I didn't read the blurb so I didn't know it had time travel in it. Did I enjoy it? Absolutely, I just hoped for a different ending.
In Yorkshire, the year is 1943 and Lily Baines is working intercepting naval communications during WW2. She doesn't decode the messages. Those documents go to Bletchley Park to be decrypted. One day while at her job, she intercepts a communication from a man named Matt Jackson. The next 43 minutes are all shocking to Lily. She can't believe what she heard. She doesn't think anyone will believe her. Matt Jackson mentioned the year being 2023.
How can this be possible and how does she help him?
A short story that is crammed with all sorts of goodies. I liked it from beginning to end. Both characters despite their different timelines were likable and interesting.
Highly recommended for Kate Quinn's fans.
Cliffhanger: No
4/5 Fangs
Posted by MrsLeif at 5:59 PM