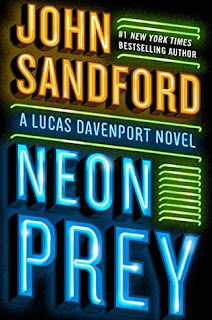 Lucas Davenport pursues a prolific serial killer who has gone undetected for years in the newest nail-biter by #1 NewYork Times-bestselling author John Sandford.
It was a relatively minor criminal matter, all things considered, but enough that the U.S. Marshals obtained a warrant to enter the home. They didn't expect to unearth trophies from a score of killings.
Now Davenport is on the trail of a serial murderer, one who was able to operate for years without notice or suspicion. But there's even more to this killer than meets the eye...

Lucas is on the hunt for a cannibal in Neon Prey.
Yes, you heard it right. A man by the name of Clayton Deese is arrested after beating up another man for not paying his debt to a loan shark named Rodger Smith. Instead of cooperating with the police, once he is out on bail, he disappears.

Rae and Bob who are US Marshals and have worked with Lucas on prior cases called him to come over to New Orleans after they find shallow graves on Deese's property. They also find enough evidence that suggests he was cannibalizing his victims. The search is joined by an FBI agent, Sandro Tremanty. Together, they will follow the clues from Louisiana to California and later on to Nevada.

The Marshalls suspect Deese has joined his brother's crew who specializes in home invasions. It will be great to get them all but catching Deese is the sole object in Lucas's mind.

Enjoyable banter, fast-paced action, and interesting characters are some of the reasons why this series is a success!