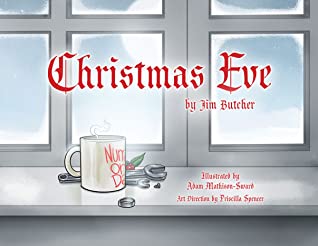 Jim wrote a new short story, Christmas Eve, as a gift for his fans on December 24, 2018. It is posted to his website and Facebook page. The story is set after Peace Talks and Battle Ground and depicts Harry's first Christmas Eve as a dad, as well as a few other familiar faces. As it was released before its predecessor, it does offer some hints as to the happenings of Peace Talks and Battle Ground, but no major spoilers.

I read this short story back in 2018 but I guess I forgot to review it. I reread it (it only takes 10 minutes) and found it still to be adorable.
It is a cute story about Harry Dresden putting together a gift for his daughter, Maggie on Christmas Eve. His dog Mouse is with him. This is going to be their first Christmas together and he wants it to be a special one. A few characters drop by including Mab.
Cliffhanger: No
4/5 Fangs