Things We Do in the Dark by Jennifer Hillier 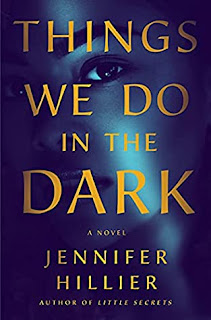 A brilliant new thriller from Jennifer Hillier, the award-winning author of the breakout novels Little Secrets and Jar of Hearts. Paris Peralta is suspected of killing her celebrity husband, and her long-hidden past now threatens to destroy her future.
When Paris Peralta is arrested in her own bathroom – covered in blood, holding a straight razor, her celebrity husband dead in the bathtub behind her – she knows she'll be charged with murder. But as bad as this looks, it's not what worries her the most. With the unwanted media attention now surrounding her, it's only a matter of time before someone from her long hidden past recognizes her and destroys the new life she's worked so hard to build, along with any chance of a future.
Twenty-five years earlier, Ruby Reyes, known as the Ice Queen, was convicted of a similar murder in a trial that riveted Canada in the early nineties. Reyes knows who Paris really is, and when she's unexpectedly released from prison, she threatens to expose all of Paris's secrets. Left with no other choice, Paris must finally confront the dark past she escaped, once and for all.
Because the only thing worse than a murder charge are two murder charges.

Things we do in the dark kept my interest from the first scene to the end.
The main character is Paris Peralta. She is found by the cops in the bathroom with her husband’s dead body in the tub and she is holding the murder weapon in her hands.
Looks bad, right?
Worse, her husband Jimmy Peralta is 30 years older than she is. Jimmy is also famous. He was part of a show that everyone remembers and recently he has come back from retirement to do a couple of comedy specials.
Paris knows the situation is dire. Yet, it can be worse if they find out the truth of who she really is. Although, someone already knows and is blackmailing her.
Ruby Reyes, the Ice Queen, is in prison in Canada. She is about to be released back into society after murdering a man. She knows who Paris is and wants money in exchange for silence.
Drew is an investigative reporter in Toronto. His next true-crime podcast is about Ruby Reyes and her daughter. He wants the world to know what an awful person Ruby really is. Drew feels guilty. He made mistakes and he is relieving the time when he let his friend down.
Joey Reyes is the daughter of Ruby Reyes. She suffered in the hands of Ruby's verbal and physical abuse.
Things we do in the dark has three POVs. Paris, Drew, and Joey. We get to know Joey and what she went through from early childhood. It was quite heartbreaking.
I found the audiobook to be perfect for this novel. It kept the timelines straight for me. I enjoyed all 3 POVs and despite guessing the twists, I found that I liked the overall picture.
Cliffhanger: No
4/5 Fangs
A complimentary copy was provided by Minotaur Books via Netgalley in exchange for an honest review.
Posted by MrsLeif at 9:58 PM