The Other Half of the Grave by Jeaniene Frost
Night Huntress #1.1 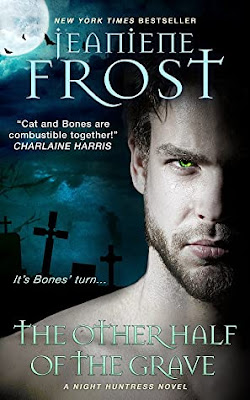 Title: The Other Half of the Grave
Series: Night Huntress #1.1
Author: Jeaniene Frost
Release Date: April 26, 2022

From the New York Times bestselling author of the Night Huntress series comes a thrilling new look at the iconic origin story of Cat and Bones, as experienced by Bones…from the other half of the grave.
There are two sides to every story–and the sizzling British alpha vampire, Bones, has a lot to say…
Ever wondered what Bones was thinking and feeling when he and half-vampire Cat Crawfield first met? Or how their story might differ if he were the one telling it? Now, relive the beginning of Cat and Bones' bestselling love story through Bones' point of view, which reveals a darker, sexier take on their early days, as well as a deeper dive into Bones' past, the vampire world, and other things that Cat didn't see when their story was told only through her eyes in Halfway to the Grave.
Cat had her say. Now, it's Bones' turn.

Finally, we get Bones' point of view!!
I read this series so many years ago (the first book was 2007!!) and it is still one of my favorite urban fantasy books! Cat and Bones are synonyms of a great team.
Jeaniene Frost has given her readers a great gift. We are able to go back into the Night Huntress world but this time through Bones' eyes.
Bones is a British master vampire who hides some of his powers from Cat. As fans of the series know, when Cat (a half-human/half-vampire) met Bones she despises vampires and her only joy in life is to kill them. Of course, as Bones points out, Cat has only dealt with vampires that are not too strong. He offers to train her in exchange for her joining him in killing the vampires he wants to get rid of. It sounds like a win-win scenario. Yet, so many things happened in this one book including the beginning of their romance.
I absolutely loved it. The audiobook was fantastic. Bones was there with me everywhere I went. Sigh. Cat is one of my favorite heroines of all time. She grows more confident and deadly with each book. She also has a great supportive partner in Bones.
I can only hope we get another Bones book which I would read without hesitation.
Cliffhanger: No
45 Fangs
Posted by MrsLeif at 7:54 PM