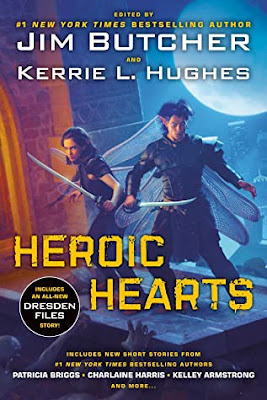 This is the way an anthology should be done. I was surprised at how much I liked it. Maybe it's because I'm familiar with half of the series in this book.
As a huge Dresden and Alpha and Omega fan, I knew I needed to read this one. The audible version helped so much in helping keep track of all the characters, new and old.
LITTLE THINGS by Jim Butcher
Toot-Toot is a sprite that protects Harry in the way he can. Toot-Toot also loves that Harry can provide him with his favorite food: Pizza. So Little things have Major General Toot-Toot Minimus defend Harry, his friends, and pizza from evil gremlins.
Glad I didn't have to wait to read this one. James Marsters does the perfect voices in the Dresden world. I couldn't listen to a book without his voice. I also love Toot-Toot and his attempts to gain the love of Lacuna.
THE DARK SHIP by Anne Bishop
The Others is at the top of my favorite fantasy series. The Dark Ship just made me want to be in this world again. Vedetta "Dett" is the protagonist of this short story. She has "feelings" about boats. She saves a pony and knows that she will be punished by the evil man who rules Pyetra, Captain Starr. What she wasn't counting on was the Black Ship and Corvo Sanguinati.
Loved it! I just wished that it was a full novel. I can get behind these new Others characters.
COMFORT ZONE by Kelley Armstrong
Chloe Saunders is a necromancer who is contacted by a ghost named Justin who asked for help saving his sister from the people who killed him. She and her boyfriend Derek Souza will decide to help find the 13-year-old girl and save her.
I read The Darkest Powers series so many years ago. I almost didn't remember who Chloe was. I remembered that I did like her and at that time she was not with Derek yet. I do remember loving Kelley Armstrong's Otherworld series. Elena and Clay were my favorite couple.
TRAIN TO LAST HOPE by Annie Bellet
Raina comes looking for Cassidy and asks her to follow her. She believes she has found the trail to find their missing daughter, Mairi.
I'm not familiar with this series but the horse "Nightmare" intrigued me.
FIRE HAZARD by Kevin Hearne
I haven't read this series in a while. I do remember loving Oberon and I see now that Atticus, the druid has another dog, Starbuck. This short story is told from Oberon's POV. By the end of it, Oberon will know that courage and sausages are not the same.
GRAVE GAMBLES by R.R. Virdi
Vincent Graves can move his soul into a recently departed corpse and bring it back to life. He has a time limit where he needs to find the monster who killed the body he is inhabiting and dispose of him.
I can see myself reading more about this character.
SILVERSPELLby Chloe Neill
I used to love Merrit and Ethan until something happened that made me stop reading the Chicagoland Vampire series. Now, I see this is a new series, a spin-off where Elisa Sullivan and her boyfriend Connor are the main characters. After, reading this short story, I'm tempted to give Merrit and Ethan another try.
TROLL LIFE by Kerrie L. Hughes
I loved this one. The Troll, Harzl Hellirverja was nice, he had a dog, Snori, and communicated with the trains. I will look into this series further.
THE RETURN OF THE MAGE by Charlaine Harris
After a beacon is activated and the majority of the team dies, Batanya and Clovache decided to follow the beacon signal accompanied by Vandler to look for the rest of the team.
This was my least favorite series in this book. It was hard to follow all these different characters or care about them in such a short time.
THE VAMPIRES KARAMAZOV by Nancy Holder
Alexie is a vampire who used to be a monk. He worries about the sins of his father and brothers who are all vampires. He knows his brothers are planning something and he must find the courage to stop them. I haven't read this series but I did like Alexei and I'm intrigued by another one of his brothers, Dmitri.
THE NECESSITY OF PRAGMATIC MAGIC by Jennifer Brozek
Two witches trying to stop a daydream nightmare from happening. I like the two ladies. She seems to be fierce and determined.
DATING TERRORS by Patricia Briggs
Love Asil and him finding a good date was the best!! My only wish would have been for his story to be 6 more hours. He deserves some happiness and so does his wolf.
Of note, the sad thing about this book is that Rachel Caine was supposed to be part of it but she died before she could join them. She was a good writer and she will be missed.
Cliffhanger: No
4/5 Fangs
A complimentary copy was provided by Ace via Netgalley in exchange for an honest review.
Posted by MrsLeif at 8:01 PM