Meant to Be by Emily Giffin 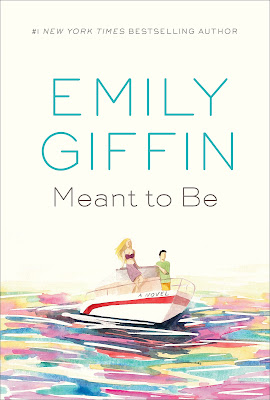 A restless golden boy and a girl with a troubled past navigate a love story that may be doomed before it even begins in this irresistible new novel from the #1 New York Times bestselling author of Something Borrowed and The Lies That Bind.
The Kingsley family is practically American royalty, beloved for their military heroics, political service, and unmatched elegance. When Joseph S. Kingsley III is born in 1960, he inherits the weight of that legacy. Growing up with all the Kingsley looks and charisma, Joe should have no problem taking up the mantle after his father’s untimely death. But he is also a little bit reckless, and can’t seem to figure out how to channel the expectations of an entire country.
No one ever expected anything of Cate, on the other hand. She, too, grew up in a single-parent household—just her and her mom scraping by in their small apartment. As a teenager, though, Cate is discovered for her looks. Modeling may be her only ticket out of the cycle of disappointment that her mother has always inhabited. Before too long, her face is everywhere, though she is always aware that she’d be a pariah in her social circles if anyone knew her true story.
When Joe and Cate’s paths cross, their connection is instant. What remains to be seen is whether their relationship will survive the glare of the spotlight that follows Joe everywhere. And just as they find themselves in the make-or-break moment, the tragedy that seems to run in Joe’s family right alongside all that privilege will repeat itself.
In a beautifully written novel that recaptures a gilded moment in American history, Emily Giffin tells a story of a love that may or may not have the power to transcend circumstances that seem arrayed against it . . . and the difficulty of finding your way to the place you belong.

Joseph S. Kingsley III is considered American royalty. He comes from a line of wealthy, accomplished, and well-known individuals. Joseph is expected to succeed and become something special. Joseph is not sure of what he wants to do with his life but he can feel the pressure building.
Cat's childhood was not an easy one. Thankfully, Cat is "discovered" and starts modeling as a teenager, becoming quite popular and in-demand making her face easily recognizable.
When Joseph meets Cat, he knows she is the one. However, he will need to convince his mother and his best friend that Cat is his future despite their differences.
As soon as I realized Meant To Be was loosely based on JFK Jr. and Carolyn Bessette Kennedy's romance, I knew I wanted to read it.
The book has both POVs. Each character detailed their different backgrounds and I was rooting for their love to go the distance without a horrible tragedy at the end.
I am one of those that loved John John. I thought he had great potential and possibly an amazing future. Despite not knowing him, I felt saddened by his death. Both lives were cut too short.
Just like the author, I used to read (guiltily) about their courtship and then their marriage. Who hasn’t seen their wedding picture with him kissing her hand? Cruelly their romantic story ended drastically on July 16, 1999.
Meant to Be is classic Emily Griffin with interesting characters you want to get to know and would love to meet in real life.
Cliffhanger: No
3.5/5 Fangs
A complimentary copy was provided by Ballantine Books via Netgalley in exchange for an honest review.
Posted by MrsLeif at 6:33 PM