The Hotel Nantucket by Elin Hilderbrand 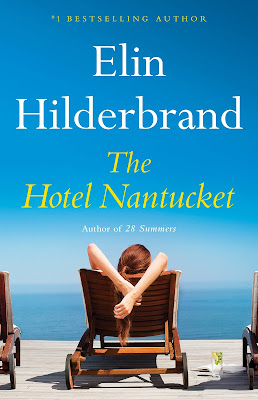 After a tragic fire in 1922 that killed 19-year-old chambermaid, Grace Hadley, The Hotel Nantucket descended from a gilded age gem to a mediocre budget-friendly lodge to inevitably an abandoned eyesore — until it's purchased and renovated top to bottom by London billionaire, Xavier Darling. Xavier hires Nantucket sweetheart Lizbet Keaton as his general manager, and Lizbet, in turn, pulls together a charismatic, if inexperienced, staff who share the vision of turning the fate of the hotel around. They face challenges in getting along with one another (and with the guests), in overcoming the hotel's bad reputation, and in surviving the (mostly) harmless shenanigans of Grace Hadley herself — who won't stop haunting the hotel until her murder is acknowledged.
Filled with the emotional tension and multiple points of view that characterize Elin's books (The Blue Bistro, Golden Girl) as well as an added touch of historical reality, Hotel Nantucket offers something for everyone in this summer drama for the ages.

Is it summer? It must be because Elin's new Nantucket book is almost out.
Every year, I wait (in)patiently for her new story. I have enjoyed so many of her other books and she always amazes me with how she is able to transport me to Nantucket, a place I have never been (but I want to go).
So what did Elin have in mind for this novel? Well, I would say that she centers the storyline on the people working at the Hotel Nantucket. The hotel was an eyesore until British billionaire, Xavier Darling decides to buy it and renovate it in the most luxurious way. He hires Lizbet Keaton as his general manager. He tells her that he bought the hotel to impress two women. One of them is a mysterious blogger who rates hotels as Keys. No hotel has been able to get the 5 Keys. Darling wants the Hotel Nantucket to be the first. He doesn't tell Lizbet who the other woman is.
Lizbet decides to apply for the job after she discovered her boyfriend and chef of their restaurant sexting with another woman. No one on the island would have thought that they would break up after so many years. Liz knows she needs a change and demonstrating to the world that she can make the hotel a success becomes her next goal. She hires quite a few people and she is happy with her choices although she doesn't know the secrets they are keeping. Thankfully, the readers will get to discover all of them one by one including the person responsible for the death of a chambermaid killed in 1922 who has been haunting the hotel since her death.
My new favorite Elin Hilderbrand's audiobook!! Erin Bennet's masterful narration does a wonderful job of bringing these characters and Nantucket to life.
I liked all the characters but I guess my favorites were Lizbet, Longshot, and the kids. I also loved how Elin incorporated some of her past characters from other books into this one. I always like to know how those characters are doing. In this case, Fast Eddie made a few appearances.
In addition to writing a fun and entertaining story, Elin gives us at the end of the book a list of places to visit in Nantucket. I know I will need it when I go. I just don't know if I want to go in the summer or for Christmas.
Cliffhanger: No
5/5 Fangs
A complimentary copy was provided by Hachette Audio, Little, Brown & Company via Netgalley in exchange for an honest review.
Posted by MrsLeif at 7:19 PM