The Secret Life of Albert Entwistle by Matt Cain 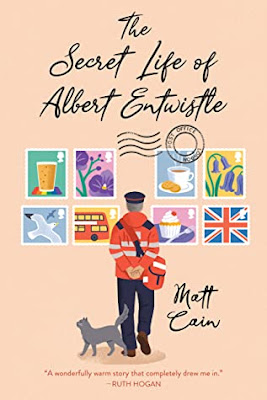 In a humorous, charmingly wise novel perfect for fans of Fredrik Backman and TJ Klune, the forced retirement of a shy, closeted postman in northern England creates the opportunity for him to track down his lost love, embrace his true self, connect with his community, and finally experience his life’s great adventure….
Every day, Albert Entwistle makes his way through the streets of his small English town, delivering letters and parcels and returning greetings with a quick wave and a “how do?” Everyone on his route knows Albert, or thinks they do—a man of quiet routines, content to live alone with his cat, Gracie.
Three months before his sixty-fifth birthday, Albert receives a letter from the Royal Mail thanking him for decades of service and stating that he is being forced into retirement. At once, Albert’s simple life unravels. Without the work that fills his days, what will he do? He has no friends, family, or hobbies—just a past he never speaks of, and a lost love that fills him with regret. And so, rather than continue his lonely existence, Albert forms a brave plan to start truly living, to be honest about who he is...and to find George, the man with whom he spent one perfect spring and summer long ago.
One painful yet exhilarating step at a time, Albert begins searching for George and revealing his story to those around him. As he does, something extraordinary happens. Albert finds unlikely allies, new friends, and the courage to help others—even as he seeks the happiness he’s always denied himself.
Beautifully written, funny, and wise, The Secret Life of Albert Entwistle is a book to fall in love with and to be inspired by, one that proves it is never too late to live, to hope, and to love.

Albert Entwistle has worked his whole adult life delivering the mail. He knows his route like the palm of his hand. Yet, he has kept to himself for 50 years without interacting with anyone on his course.
He lives alone with his cat Gracie and listening to music is the highlight of his day. He has no friends and no human love in his life.
Albert doesn't like surprises and the biggest one is coming. He receives a letter from the Royal Mail telling him that in 3 months' time he has to retire. Albert is frantic. He doesn't know what he will do if he doesn't have his routine anymore.
Albert knows he can't keep on living this way. He knows he has made mistakes and he lost the love of his life, George. They were teenagers when they fell in love and Albert is responsible for their breakup. After much self-analyzing, he makes a decision. He will open up to people, start looking for George and apologize for what he did.
This was a good story! I was able to care for Albert and I was sad about how alone he was and how his life was so full of fear. I enjoyed his journey to self-discovery with the help of Nicole, his workmates, and Edith. What I wasn't sure about was him trying to look for George after so long and not realizing that maybe George already had a family or a special someone. 50 years is a long time to wait.
Kudos to Simon Vance for a wonderful narration and for transporting me to Albert's homeland.
Cliffhanger: No
3.5/5 Fangs
A complimentary copy was provided by RB media via Netgalley in exchange for an honest review.
Posted by MrsLeif at 9:26 PM