The Minders by John Marrs 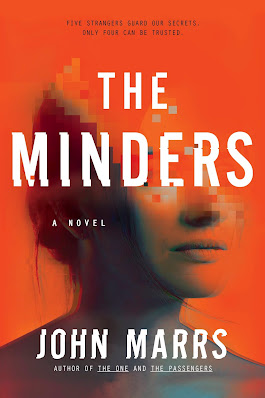 Everyone has secrets. They know yours...
In the 21st century information is king. But computers can be hacked, files can be broken into. So a unique government initiative has been borne. Five ordinary people have been selected to become the latest weapon in thwarting cyber terrorism. A revolutionary medical procedure has turned them into the ultimate secret keepers - the country's most secretive information has been taken offline and turned into genetic code implanted inside their heads.
Together, the five know every secret – the truth behind every Government lie, conspiracy theory and cover-up. Only somebody has discovered who the secret keepers are. And one by one, they are being hunted down...

I like how The Minders is written in the same word as The Passengers and The One.
I believe it makes sense to read the first two books to get an idea of the world John Marrs has created.
This time, the Hacking Collective is ready to blackmailed countries into paying them what they want or having all their secrets revealed.
Many countries have fallen to this blackmail but the UK has not fallen yet. In order to prevent this, a new approach has been taken by the government with the help of the best scientists. With the use of a puzzle, certain humans who have synaesthesia have been selected to get the information implanted in their heads. If after five years nothing happens, they can be returned to a normal. In the meantime, they have to walk away from everything they know, they love or hurts them.
Then, one of them is murdered. And the other ones have to try to stay alive before all the secrets die with them.
At first, it was hard to follow Charlie Nicholls, Flick Kennedy, Sinéad Kelly, Bruno Yorke, and Emilia but soon I was able to keep them all straight and started rooting for one of them to survive it all.
The Minders by John Marrs is entertainment in the best possible way. Complex characters and a sense of dread and running out of time kept me reading until the end.
The idea of getting something implanted is not too crazy anymore. Same with cars that can drive themselves. The DNA match is harder for me to accept.
I wonder if we will see this world again. I hope we do.
Cliffhanger: No
4/5 Fangs
A complimentary copy was provided by Berkley via Netgalley in exchange for an honest review.
Posted by MrsLeif at 2:02 PM