The Invisible Husband of Frick Island
by Colleen Oakley 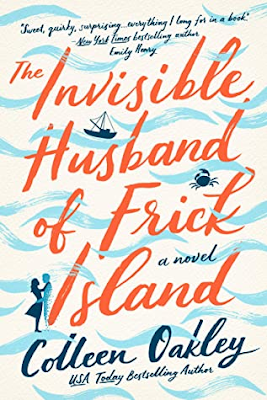 Sometimes all you need is one person to really see you.
Piper Parrish's life on Frick Island—a tiny, remote town smack in the middle of the Chesapeake Bay—is nearly perfect. Well, aside from one pesky detail: Her darling husband, Tom, is dead. When Tom's crab boat capsized and his body wasn't recovered, Piper, rocked to the core, did a most peculiar thing: carried on as if her husband was not only still alive, but right there beside her, cooking him breakfast, walking him to the docks each morning, meeting him for their standard Friday night dinner date at the One-Eyed Crab. And what were the townspeople to do but go along with their beloved widowed Piper?
Anders Caldwell’s career is not going well. A young ambitious journalist, he’d rather hoped he’d be a national award-winning podcaster by now, rather than writing fluff pieces for a small town newspaper. But when he gets an assignment to travel to the remote Frick Island and cover their boring annual Cake Walk fundraiser, he stumbles upon a much more fascinating tale: an entire town pretending to see and interact with a man who does not actually exist. Determined it’s the career-making story he’s been needing for his podcast, Anders returns to the island to begin covert research and spend more time with the enigmatic Piper—but he has no idea out of all the lives he’s about to upend, it’s his that will change the most.
USA Today bestselling author Colleen Oakley delivers an unforgettable love story about an eccentric community, a grieving widow, and an outsider who slowly learns that sometimes faith is more important than the facts.

Bittersweet story with a good message!
Anders is a reporter but he wants to become a famous podcaster like the one who made Serial. He goes to Frick Island on an assignment. It’s the yearly Cake Walk. After doing his interviews, he stops by the One-Eyed-Crab to get a bite to eat when a beautiful young woman enters the place. After arming himself with courage, he walks toward her and asks her if he can sit with her. The woman's name is Piper and she tells him absolutely not. She is married.
After leaving the island, Anders gets an email from someone who tells him that he missed the Island's big story. He returns to the island and he learns that Piper's husband, Tom is dead but that Piper believes he's still with her. The whole island is happy to continue her delusion and they continue to talk or say hi to "Tom".
Anders spidey senses go crazy, he knows he has hit the jackpot of a story. He hopes that doing a podcast about Piper is going to make him get more listeners and finally his podcast can take off.
But what happens when your subject starts captivating your heart?
And what will happen when Piper finds out the truth about what Anders is really doing?
Just as Anders, my notions and objections about Frick Island started melting away. The island and its occupants were quite entertaining. A tight group of people who knew everything about each other. I like how Anders started gaining the favor of the island inhabitants. He started doing things for others and they went from tolerating him to actually looking forward to seeing him.
It was so sad to see Pipers' denial. It has to be devastating to lose your partner, your first and only love so young. I felt sad and my heart broke for her and her loss. I wasn't sure how much her denial was going to affect her psyche.
Also, I learned to love Anders. I loved his quirkiness. In general, he was a nice guy and his shortcomings made him more real to me. His character development was well done.
I liked many of the messages the author gives us: To learn about other people before scratching them from your life. To be more tolerable. To be more helpful. Understand that people grieve in different ways.  To open up to others. After all, "no man is an island".
4/5 fangs
A complimentary copy was provided by Berkley via Netgalley in exchange for an honest review.
Posted by MrsLeif at 12:05 PM